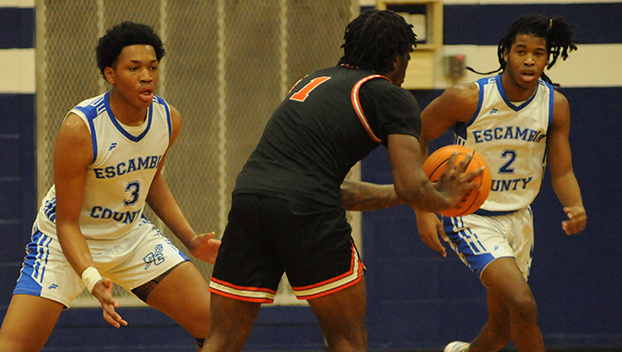 Those are a few traits that Escambia County boys basketball coach Layton Knight used to describe his Blue Devils team.

At present, the No. 2 Blue Devils sit at 17-3 overall, and 3-0 in Class 4A, Area 1. ECHS faces Williamson this Friday night in a key area match up at Cornell Torrence Gymnasium.

ECHS is coming off a dominant, Tuesday night 65-35 area victory over W.S. Neal.

“He makes us more longer,” Knight said. “When you’re long, it’s hard to score on us offensively, and then defensively, it’s hard for a team to defend us because we’re so hybrid mobile.”

Knight added the while being long and mobile are good on defense mobility is the main key.

Knight said something else that makes the team special is that they know the basic fundamentals of what they’ve been running since middle school.

“We’re still throwing different things with each different team we play,” the coach said. “Mostly, we’re a solid man (to man) team. It’s hard to defend man. The good thing about this team is that we can go with a small set up or with a bigger line up.

“That’s what makes us so flexible,” he said. “We can go run and gun, be slow with a half court set. We’re so versatile.”

Regarding area play, Knight said the goal for the team is to host the area tournament.

To get there, the Blue Devils will have to win this Friday against WHS, Vigor and St. Michael. ECHS beat Vigor 62-49 on Jan. 7.

“That was a statement game,” Knight said about the win over the Wolves. “That’s how you want to play. You want to make statements. You just want to show everybody where you’re at. We always get everybody’s best game.

“We’re just playing well,” he said. “We had a good Christmas break. We lost a game, but I’m glad that happened then. Now, we can focus on what’s ahead in area. I call it ref-focus.”