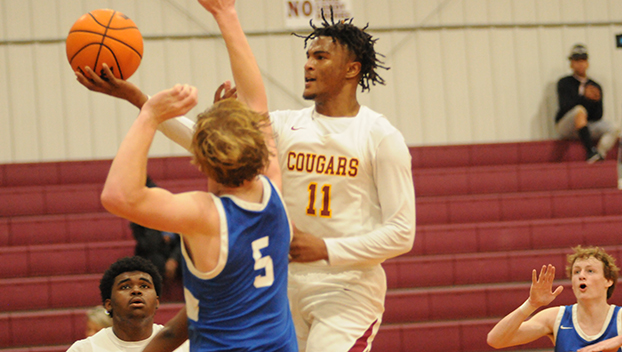 Escambia Academy’s Bubba Nettles hit a game-winning layup with about 2 seconds left to help lead the Cougars to a 46-44 area victory over Wilcox Academy Tuesday night in Canoe.

Nettles’ opportunity came after the visiting Camden team committed an offensive foul with 7 seconds remaining in the close contest. The Cougars took the ball from the WA side of the court, and Nettles found a lane up the right side of the paint.

EA boys basketball coach Willie White said the game was a close win, and they were fortunate to go home with a victory.

White said he knows the boys will correct errors from the game going forward in area play. EA hosts Sparta this Thursday, and then travels to Lowndes next Tues., Jan. 25.

White said whoever wins the area advances to the Elite Eight, adding that if EA beats both it should be region champions.

Both teams went back and forth early. WA attacked the basket from the perimeter, and played solid defense in the paint.

EA, when it found a hole, attacked the paint and kept its offense inside.

In the fourth period, Landon Sims found Malaki Haynes for a bucket to go cut the lead to 38-35 after WA went on a 4-0 run.

A short time later, Haynes completed a three-point play to give EA a one-point advantage.

Then, Nettles got a three-point play, and WA answered to tie it at 42-all.

After trading shots to tie the game once again, EA missed a shot and WA took a timeout with 30.9 seconds remaining.

From the timeout, the offensive foul ensued and Nettles found his opportunity.

Much like the varsity boys, EA’s varsity girls came back after falling to WA on the road to win 35-28 on Tuesday.

“I was so proud of these ladies,” EA girls coach Larry Bonds said. “They have worked so hard this year and improved so much.”