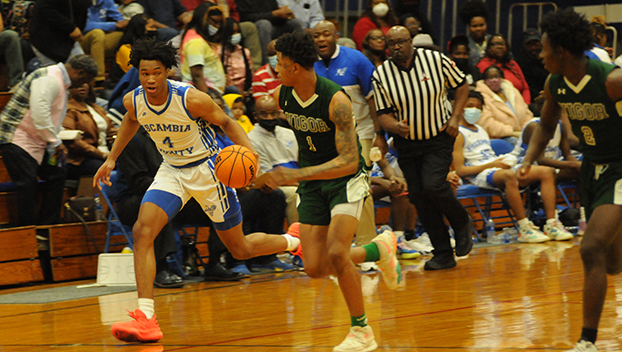 Williams led the way with 20; Dirden had 11; and McPherson added 10 in the victory.

After a close first half, the Blue Devils led 20-16 at the break. McPherson scored nine of his 10 points in the first 16 minutes of the game.

Dirden hit a 3-pointer to get the third period going and increased the lead to seven.

Vigor, quick up and down the court, answered with a 3-pointer of its own a short time later.

Hakeem Johnson found Sheldon a few minutes later to give the Blue Devils a 30-25 advantage.

Dirden then got a steal and made the conversion going coast to coast. Sheldon added a rebound and putback to give Atmore a 35-25 lead going into the fourth.

Senior Makayla Lyons got her own rebound and made a putback with around 3 seconds left in the game.