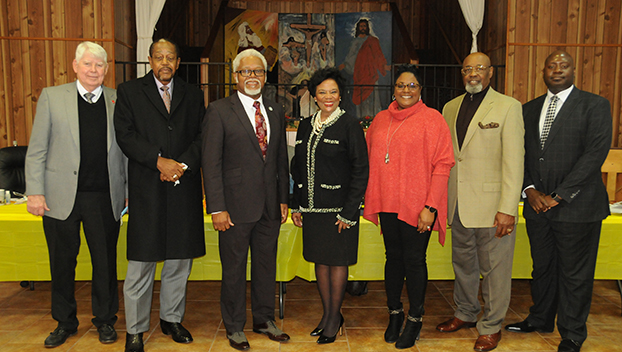 The annual breakfast, which is sponsored by the Yellow Hat Society, is held each year to honor Parks, who is best known for her role in the Montgomery Bus Boycott. On Dec. 1, 1955 in Montgomery, she rejected bus driver James F. Blake’s order to relinquish her seat in the colored section to a white passenger after the whites-only section was filled.

Parks’ resilience and courage were recognized during the annual breakfast.

Keynote Speaker and Evergreen Mayor Stanley Stallworth said it’s right to honor Parks, but challenged the crowd to be diligent.

“She was a brave American pioneer,” Stallworth said, adding that Parks saw many patterns of racial segregation. “She saw a nation ripped a part at the seams.

“We still weep in disgrace what Rosa Parks endured at the hands of American bigotry and hatred,” he said.

Stallworth said Parks was honored as the mother of the freedom movement, and the celebration is about her life as a leader.

Stallworth noted that the present times are seeing a campaign of voter suppression, adding that it’s the modern form of Jim Crow.

“Long before she made headlines, she stood up for freedom,” Stallworth said. “That moment (on the bus) tells us how change happens or doesn’t happen.

“She reminds us that this is how change happens,” he said.

Other highlights of the breakfast included a city of Atmore update from Mayor Jim Staff and the presentation of awards.

Bro. Charles Wiggins opened the breakfast with a selection of “America the Beautiful,” and Greater Mt. Triumph Missionary Baptist Church sang “You Brought Me from a Might Long Way.”

Pastor W.J. Hawthorne sang a solo and prizes were awarded.