Blue Devils take over after 2nd period, roll to 69-50 win over Holt in regional semifinal 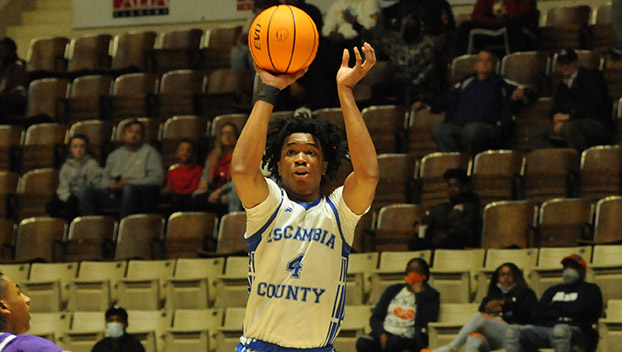 That’s what Escambia County boys basketball coach Layton Knight encouraged his team to do in the lead up and during a 69-50 victory Feb. 21 over Holt in the Class 4A southwest regional semifinals at Garrett Coliseum.

After a slow start in the first period, the Blue Devils got things going in the second and held a 26-25 advantage at halftime. In the second half, ECHS took over the contest, outscoring the Iron Men 43-25.

Knight said the boys came out a little flat, and Holt shot well in the first 10 minutes.

“After that, we took it away from them,” he said. “And shots stopped falling.”

Knight added that they went into a zone defense, which helped the Blue Devils get some stops and buckets on the offensive end.

In the second half, leading scorer Sheldon Williams and brother, Stephen, connected in the paint on a frequent basis.

Sheldon said the team buckled down on defense and kept their heads up, adding that the Blue Devils’ defense complimented the offense.

When asked about what the team did in the second period, Sheldon said the talked with Knight, and he gave them the run down.

“He gave us the motivation to play defense, and lock it down and run through what we ran through at practice,” Sheldon said. “Coach has been telling us all week (to attack t he paint) before practice, and before the game.”

Sheldon finished with a double-double 27 points and 13 rebounds. Stephen added 15 points and eight rebounds. Connor McPherson added 11 points in the victory, including a big 3-pointer in the third period.

Early on, Holt was in control, dropping shots from mid-jumper range and easy buckets under the rim. The Iron Men led 11-2 with less than 4 minuts to go on a layup by Julian Whitfield.

To start the second, Hakeem Johnson got a jumper, but Holt’s Jalen Jones nailed a 3-pointer to keep the lead.

Sheldon got a jumper, and a short time later, Stephen tied the game up on an and-one play with 4:36 left in the first half.

Sheldon gave the Blue Devils their first lead of the game at the 3:47 mark.

Johnson found Kaiden Arnold for a bucket, and then got a jumper himself for a 26-22 advantage late in the second.

Holt’s Osa Alohan drained a 3-pointer right before the break.

Whitfield spurred Holt to a 4-0 run and a 33-30 lead with some 5 minutes remaining in the third.

McPherson then converted a pair of free throws and dished up a 3-pointer with more than 4 minutes to go for a 35-55 lead.

From there, Sheldon added two easy buckets and ECHS led 39-33.

Anthony McCants made a free throw after a HHS timeout with 1:52 left, and ECHS led 40-33 going into the fourth.

Stephen added two buckets to give the Blue Devils a 51-37 lead, and more of the same occurred during the last 3:02 of the contest.

In earlier action last week, ECHS defeated Jackson 48-32 in the sub regional round.