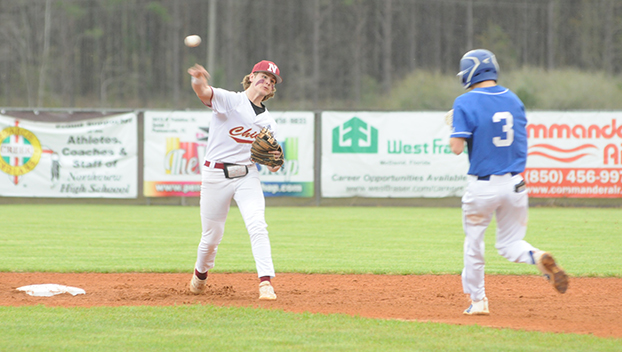 Jay scored three runs in the top of the seventh inning as the Royals beat Northview 5-3 in varsity baseball action tonight in Bratt, Fla.

The Royals led 2-1 after the third inning, and the Chiefs bounced back with two runs of their own in the fifth to go ahead 3-2.

In the top of the seventh, Jay’s Hayden Morris got things started with a lead-off double with no outs. He then advanced to third base on a passed ball.

Morris later scored on a bunt to tie the game at 3-all.

Then, Andrew Diamond and Nathan Smarr hit a RBI double and single, respectively, to build the lead to 5-3.

In the fifth inning, Kaden Odom hit an RBI triple to left center to tie the game at 2-all with no outs. Odom later scored on a passed ball to give the Chiefs a narrow 3-2 lead.

Josh Landis hit a RBI single in the bottom of the third to cut the Royals’ lead by one.