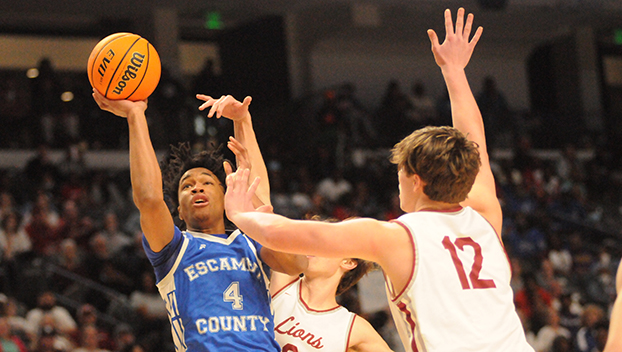 Escambia County's Sheldon Williams (4) goes up for a shot during the Class 4A Final Four game against Haleyville in Birmingham. | Andrew Garner/Atmore Advance

MONTGOMERY – Even though he wasn’t picked to be the Alabama Sports Writers Association’s Class 4A boys Player of the Year, Escambia County’s Sheldon Williams said he was blessed to have an opportunity to be amongst the best in the state.

Williams was one of 47 other finalists at the 2022 Player of the Year Banquet today at the Renaissance Hotel. The banquet was presented by ALFA Insurance and the Alabama High School Athletic Directors and Coaches Association.

The Escambia County senior forward was a finalist with Jacksonville’s John Broom and Anniston’s Antonio Kite. Kit was named the Class 4A Player of the Year.

“It was a delightful chance,” Williams said. “I was blessed to be able to go out there and have an opportunity to win, and be able to be nominated.”

On the season, Williams averaged a double double (22.3 points, 12.2 rebounds). The senior forward helped lead the Blue Devils to a state championship appearance, their first in program history.

Williams also marks the first player from ECHS to ever be selected as a finalist for player of the year.

“I just want to thank God for allowing me to play the sport I love, and my mom, and my coaches for pushing me,” he said.

Steele averaged 17.3 points for the Trojans, who finished 35-0 and won a fifth straight Class 6A championship. The 5-foot-8 guard, a two-time All-State player, is an Alabama State signee.

Dunning posted averages of 25.3 points and 12.9 rebounds, helping the Yellow Jackets to a 30-5 season and a Class 6A semifinal berth. The 6-foot-6 forward is a three-time All-State player who has signed with Arkansas.

(top 5 players regardless of classification)

CLASS PLAYERS OF THE YEAR

1A: Will Bonner, Belgreen

* With Reniya Kelly and Aniya Hubbard, Hoover is the 12th school to have two Super All-State players in the same season. The last was 2018 Hazel Green (one boy and one girl). The last girls team to have two was 2008 Midfield.

* Kelly, Hubbard and McGill-Toolen’s Barry Dunning Jr. are two-time Super All-State players. Hubbard made it in 2020.

* Anthony Johnson, the 2A boys player of the year, is the 10th all-time Midfield player to win (five boys, five girls). That is the most in ASWA All-State basketball history.

* Pisgah’s Molly Heard, this year’s 2A player of the year, won in 3A as a sophomore.

* Prattville Christian’s Ella Jane Connell is a two-time 3A player of the year.

* Anniston’s Antonio Kite is a two-time 4A player of the year.

* Plainview’s Cole Millican is a two-time 3A player of the year.