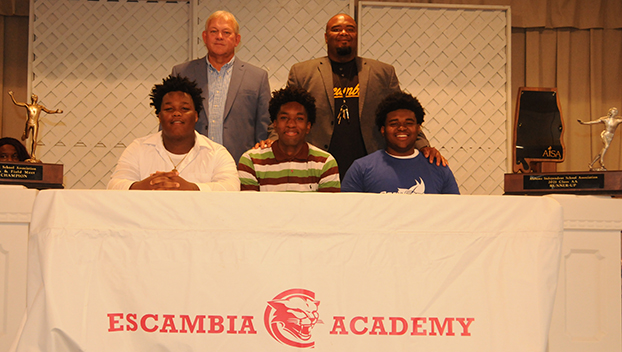 Escambia Academy’s Kanye Hooks, Rayvon Barnes and Brian Brown signed letters of intent to play football at the next level today during a ceremony at the school’s auditorium.

Hooks and Barnes signed with Peru College of Nebraska, and Brown signed with Tuskegee University.

Hooks thanked his family for pushing him to be where he is today.

Brown thanked God for giving him a vision for football, adding that he wouldn’t be here without his family’s and head football coach Hugh Fountain and coordinator Mike Sims’ support.

Fountain spoke for Barnes, who thanked EA and family for their support.

Fountain began the ceremony saying that it’s a special moment for each of the player’s lives and their families.

He added that this senior class has played a big role in the school’s recent sports success. The Cougars won the AISA overall outdoor track and field title this year, and finished runner up in football.

Barnes is the grandson of Letha Barnes; Brown is the son of Elizabeth Hazley; and Hooks is the son of Lamont Hooks and Latasha Staples.

Troopers on scene of multi-vehicle wreck on Hwy. 21…