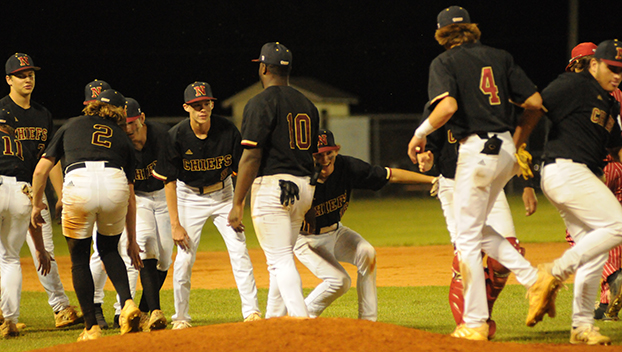 A strong pitching performance and a big fifth inning helped Northview to beat Paxton, Fla. 7-3 in the Class 1A regional semifinal Tuesday night in Bratt.

Jamarkus Jefferson pitched 4.2 innings, allowed two runs on two hits and struckout six to earn the win on the mound. Cason Burkett came in in relief for 2.1 innings, striking out two and allowing one run on one hit.

In the fifth inning, things got going on an infield hit hustle from Kaden Odom to first base. Luke Bridges and Rustin Pope were able to get on to load the bases, and Jefferson added a timely hit to open the game up for a four-run inning.

NHS baseball coach Jeremy Greenwell said he couldn’t have been more proud of Jefferson and Burkett on the mound.

“There were so many times throughout the game that our pitchers’ backs were against the wall and they worked out of several big innings,” NHS head baseball coach Jeremy Greenwell said.

Greenwell said Odom got the bottom of the fifth inning going well, and the reset followed suit.

With the win, the Chiefs improve to 19-6 overall and advance to the regional final, which will be played this Friday night at Holmes County. First pitch is slated for 7 p.m.

“Hopefully, we can keep this momentum going into the regional championship game against Holmes County,” Greenwell said.

Jefferson and Wyatt Scruggs led NHS with two hits each. Odom, Bridges and Burkett had one hit each.

NHS scored two runs in the second inning and one run in the third to gain an early lead.