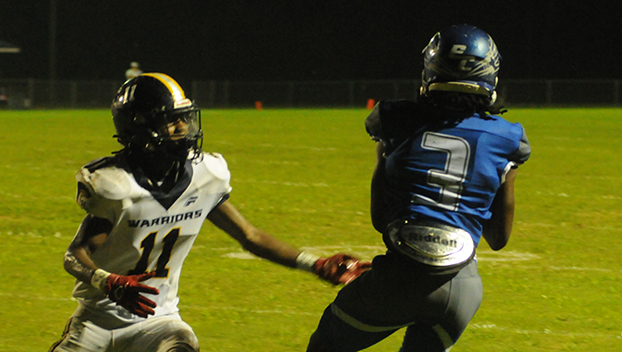 Lorenzo Arnold caught two touchdown passes from quarterback Dakota DeSpain, and Lebron Hooks ran back a pick six more than 80 yards to tie the game during the final 12 minutes.

The game-winning touchdown came on an 8-yard pass on third down from DeSpain to Arnold with 14.5 seconds left. Place kicker Luis Garcia made the point after easily to put the Blue Devils ahead by a score.

Throughout all the excitement, some cause of worry ran throughout the ECHS sideline.

ECHS head football coach Vincent Harris was tended to by paramedics, and after the game was taken by Medstar Ambulance to a nearby hospital due to dehydration.

However, before leaving, Harris did speak to the team, congratulating them on the victory.

“We love you coach,” players said as Harris was escorted to the ambulance.

“Offensively, we brought it together at the end of the game,” Knight said. “The boys played with heart.

“We’re changing the culture here,” he said. “FOE (family over everything).”

Early in the fourth quarter, DeSpain hit Arnold from 7 yards with 9:35 to cut the game to 14-7 after Garcia’s extra point try.

More than halfway through the third, Cottage Hill built on its lead with a 10-yard touchdown pass from Kaden Washam to Adian Quave with 4:14 left in the third.

Throughout the contest, Escambia County’s defense kept itself in the game, getting a key interceptions in the first half. The defense held the Warriors with less than 10 seconds of the game.

Cottage Hill went ahead 6-0 on a 22-yard touchdown rush with 9:22 left in the second quarter.
ECHS is back in action on Fri., Sept. 2, at home against Satsuma to start Class 4A, Region 1 play.