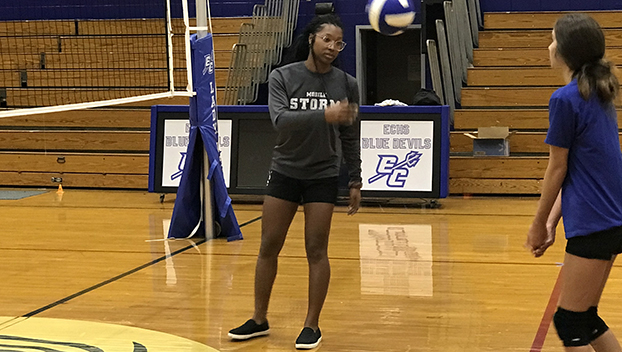 That combination is what helped lead Escambia County head volleyball coach Ashley English to the world of coaching.

English, an Atmore native and ECHS alumnus went to Coastal Alabama Community College in Brewton, where she played volleyball there for two years. She then transferred to the University of South Alabama and earned her bachelor’s degree in exercise science.

Since her senior year (2015), English said she’s been helping coach volleyball on and off, adding that she helped the team during the 2021 campaign.

“I’ve loved the sport since I was in high school,” English said. “When I started coaching I coached for the Mobile Storm volleyball team. I just fell in love with coaching. I love the kids.

“I love being around the kids when they achieve something they though they’d never achieve,” she said. “It makes me feel good just like it does them. It’s very rewarding for me.”

English said she’s always wanted to come and give back to her community, adding that she wants to help give the girls an opportunity she didn’t have.

“I want to see these girls go (Division 1) and get scholarships,” she said. “Atmore has the talent, but you’ve got to work with them.”

“I encourage them just as much as I discipline them,” she said. “I try to reward them when I do good, but I do chastise them when they don’t.”

On this year’s team, English said some of the girls had to start from scratch learning about the sport, however. She said that the girls have been working hard and have progressed well.

Leading the team this year are two seniors in Jakailah Etheridge and Deandria Adams.

English said she believes the girls will and can win their area, and make it to the super regional in Montgomery.

English said she sometimes likes to play against the girls because it increases the level of play, where she wants the girls to rise toward.

“I want them to play to a better level,” she said. “Me playing against them makes them better.”

English is the daughter of Kathy and Louis English of Atmore.