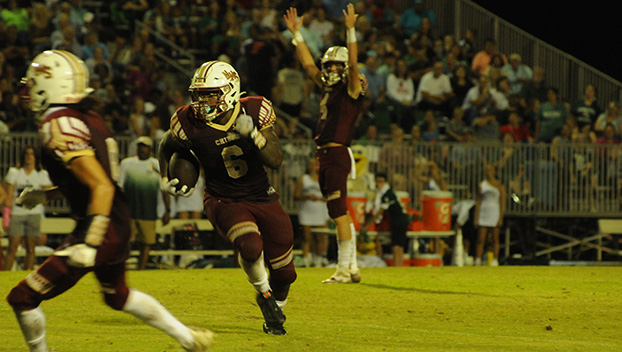 Northview’s seniors have wanted a win over Flomaton over the past three seasons.

The seniors and the rest of the Chiefs got it in a 48-33 victory over the Hurricanes tonight at Tommy Weaver Field in Bratt, Fla.

Notched 27-27 at halftime, NHS made some adjustments on defense, and tacked on two touchdowns to pull away in the state line rivalry. Century, Fla. and Flomaton played one another for more than 20 years.

NHS head football coach Wes Summerford said he told the players that the game was going to be a battle, and challenged them in the second half.

“I thought we did better in the second half,” Summerford said. “The special teams killed us in the first half.

In the third quarter, NHS running back Jamarkus Jefferson scored his third touchdown from 32 yards with more than 7 minutes left to put the Chiefs ahead 34-27 with the extra point try.

On Flomaton’s next offensive possession, cornerback Kaden Odom grabbed an interception, and the Chiefs held a 34-27 lead going into the fourth.

Jefferson scored his fourth touchdown early in the final quarter on a 25-yard rush off the left end. With the PAT, the Chiefs led 41-27.

Odom, who also serves as Northview’s quarterback, rushed the ball 14 yards with 5:20 to go. Odom’s scoring rush came after the Chiefs recovered a fumble with some 10 minutes left.

The first half was different for the Hurricanes.

Quarterback Will Smith found Jaxson Fillmore on a 42-yard scoring pass with 9:45 on the clock, and James Spizzirro ran back a blocked punt for a score to make it 13-12 late in the first quarter.

In the second quarter, Deontay Averette rushed more than 40 yards for a score with 10:05 on the clock, and Smith coverted a 2-point try to make it 20-13 FHS.

The Chiefs answered a short time later on a Luke Bridges 55-yard touchdown rush off the right end. With the PAT, the game was tied 20-20.

Flomaton added a 33-yard touchdown rush by Averette, and the Hurricanes led 27-20.

Northview then put together a good drive, which saw Odom converting a 7-yard touchdown rush to tie it at halftime.

With more than 5 minutes to go in the contest, Smith hit Fillmore on a 64-yard touchdown pass.

The Chiefs ate clock on their next offensive possession.

Summerford said the team played well, and the fans provided an excellent atmosphere.

“It’s just a joy to watch those guys,” he said. “Flomaton has got some great players. You hear about these guys. What a great atmosphere.

“I’m proud of these guys, especially the seniors,” he said. “They wanted this game for three years, and they wanted another one (Baker, Fla.). This week they put in the work rain or shine, and were practicing in the mud.”