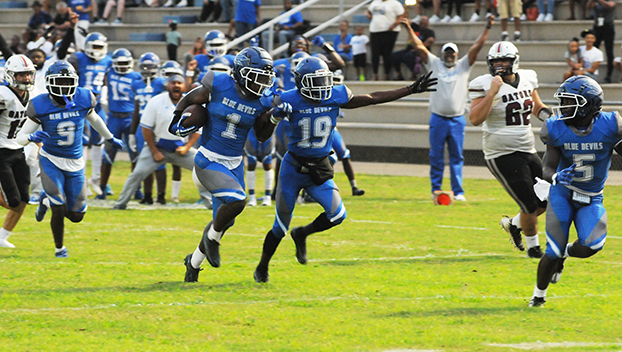 Escambia County's Lajavius Johnson (1) runs the ball back for a touchdown on a punt return. | Andrew Garner/Atmore Advance

DeSpain, Whatley account for three touchdowns each in win

Escambia County’s James Whatley and Dakota DeSpain accounted for three touchdowns each to help lead the Blue Devils to a 55-15 region victory over Satsuma tonight at Herbert Barnes Stadium in Atmore.

Whatley scored all three touchdowns in the first half. DeSpain had two passing scores and one rushing in the effort.

With the victory, the Blue Devils improve to 2-0 overall, and 1-0 in Class 4A, Region 1. ECHS visits St. Michael next week to continue in region play.

“Satsuma played well all game,” he said. “Our defense was outstanding and our special teams did well.”

In addition to Whatley and DeSpain’s good nights, Escambia County’s special teams and defense added scores of their own.

Whatley’s first touchdown came from 23 yards out with 1:23 left in the first. His second and third scores were from 6 yards out in the second quarter.

DeSpain connected with Elijah Thomas on an 85-yard go route as time expired in the first half to give the Blue Devils a 41-7 lead.

At the midway point of the third quarter, DeSpain rushed in from 9 yards for his rushing score.

He then hit Lorenzo Arnold on a 47-yard strike early in the fourth for a 55-7 lead.

Satsuma scored more than midway through the fourth quarter on a rushing touchdown. The Gators’ first TD was early in the second quarter.

Harris said he was proud of his quarterback (DeSpain) for coming back and having a good game.

DeSpain was 6-of-15 for 293 yards and two touchdowns. He had two carries for 25 yards. Whatley rushed 123 yards on 12 carries, Mason Huggins had 34 yards receiving, Lorenzo Arnold had 67 yards in receptions and Thomas added a touchdown on one reception for 91 yards.

Christian Lee had two tackles with an interception, and Johnson had a 41-yard punt return for a touchdown.