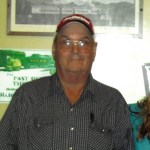 He was married to Elaine Moody for 52 years. He was a resident of Uriah, Rocky Hill Community.

He retired from Hendrix Tractor Co. and was a skilled machinist. He was a hard worker and helped many farmers with their equipment.

He served in the United States Army for six years. He enjoyed hunting, raising cattle, and gardening and shared what he grew. He was a family person, and loved his family.

He is preceded in death by his parents, Calvin and Doris Jay of Uriah; and two brothers, Gerald Jay and Dale Jay. He is survived by his wife, Elaine Jay of Rocky Hill; his son, Wayne Jay and wife, Kendall of Excel; his daughter, Loretta Sue “Sissy” Reed of Uriah; granddaughters, April Reed, Hollie (Daniel) Lambert and Aeriel Fitzhugh; grandson, Jonathan Fitzhugh; two brothers, Philip Jay and wife, Brenda “Coot” of Chrysler and Donald “Dink” Jay and wife, Ellen of Uriah; one sister, Cornelia “Tootsie” Presley of Mexboro; and his big black dog, Leroy.