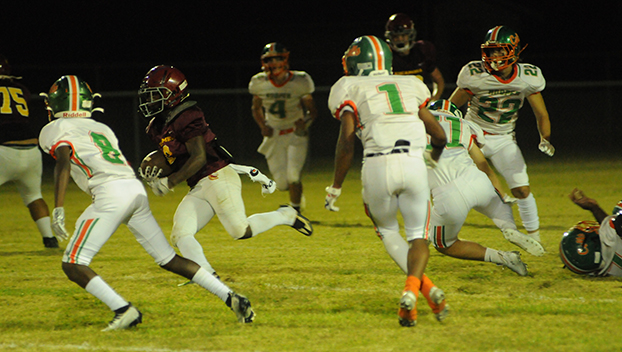 Escambia Academy scored touchdowns as a result of three turnovers in the second quarter as the Cougars beat Hooper Academy 38-20 on homecoming tonight at Bachelor Field in Canoe.

The first turnover for the Cougars came in the form of an interception catch by Christian Crook. From Crook’s forced turnover, Ty McCants ran the ball 66 yards with 5:14 left and a 20-12 lead.

EA then forced HA to punt, but Lee got a hand on it and put the Cougars in good field position.

Crook took it from there from 3 yards for a score with 1:45 left in the opening half.

The Cougars’ final turnover turned touchdown came in the form of ST Clarke stripping the ball and running it back some 60 yards with 8 seconds left. EA led 32-12 at halftime.

“Those were hug turnovers, really momentum swings,” EA head football coach Gex Billups said. “They were driving every time, two of those drives were in the red zone and one was at midfield.
“I think it really changed the game and swung the momentum to us,” he said. “The kids played hard with homecoming. There were a lot of distractions at the school, and I thought they had a great week at practice. The boys left those distractions and came to work.”

With the victory, EA improves to 2-3 overall. The Cougars have a big AISA Class 2A, Region 2 matchup next week against Pickens Academy on the road. EA needs to win one more region game to secure a berth in the postseason.

The Cougars led 7-6 going into the second quarter, and Hooper answered on a gained turnover of its own with a 3-yard scoring run from Zach Rusley to put the Colts ahead 12-7 after the 2-point try was no good.

EA was looking for its offense to get going after a slow start, and quarterback Jacob Lee provided the necessary spurt.

Lee scrambled during the Cougars’ next possession, and found Devin Kelly on a 79-yard touchdown pass with 9:04 left in the second. The PAT was no good.

“It was a very big play,” Billups said. “He’s a gamer. As a coach, you hate to see your quarterback throw across him, but sometimes it pays off.”

In the second half, Crook scored another touchdown for the Cougars.