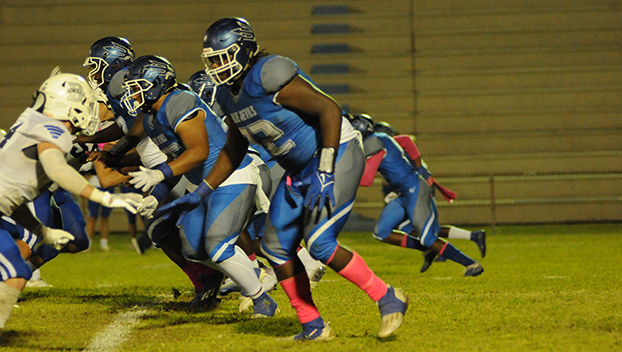 The Blue Devils and Makos played tight early, but the home team pulled away in the second half.

ECHS head football coach Vincent Harris said time was a factor for the Atmore team, especially in the first half, adding that the team should’ve probably scored.

“Time, it puts you in a bind,” Harris said. “I thought we did some good things. We came back in the second half, but we were flat.”
Harris said credit goes to Orange Beach, which was a solid football team to play against.

“The score is not an indication of what happened,” he said. “Orange Beach connect on a couple things early.”

Harris said the team had to play against adversity, adding that the refs were as bad as he’s ever seen.

With the loss, the Blue Devils fall to 4-5 overall, and 2-5 in Class 4A, Region 1. ECHS visits Northview next Friday night to close its season.

“We just want to finish out the season strong,” Harris said. “A lot of our kids know their kids. Northview’s undefeated, and it’ll be a good game.”