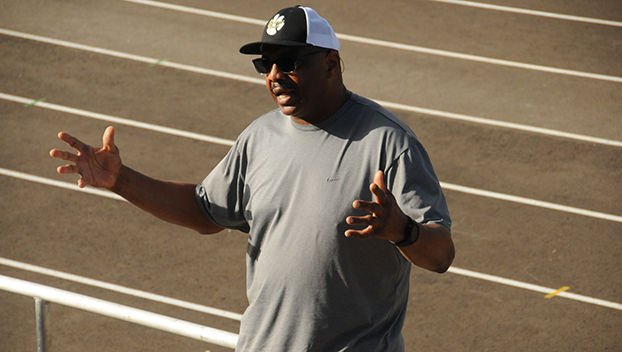 Pleasant, a Century, Fla., native spoke to the Chiefs prior to practice Monday afternoon. He spent 14 seasons in the NFL with stints in Cleveland, Baltimore, Atlanta, New York (Jets), San Francisco and New England.

He won both of his Super Bowl rings while a Patriot.

Pleasant talked about his early life as a football player, and how his coaches and family saw something in him that he didn’t see in himself.

Pleasant recalled one time on the junior football team, he said he skipped practice to go play basketball.

“We were disciplined,” he said. “We got punished for the things we did. I got so made, I walked off the field and went home.”

Pleasant said that was another defining moment in his life because at that time, his uncle saw something in him that he didn’t see himself.

Pleasant said in high school, he decided that he wasn’t going to play football his senior year, but coaches encouraged him to play.

“I ended up playing football my senior year, and got a scholarship to Tennessee State University,” he said.

Pleasant said it was tough at TSU, but the rigorous practice schedule while in high school helped prepare him for the next level.

“Coach Thomas saw something in me that I didn’t see in myself,” he said.

In 1990, Pleasant was drafted in the third round of the NFL draft by the Browns.

Pleasant said he played 14 years in the NFL because of the decisions and choices he chose to make.

He encouraged the attentive Chiefs that if they want to be successful, hang out with successful people.

Pleasant was asked a couple of questions from the team.