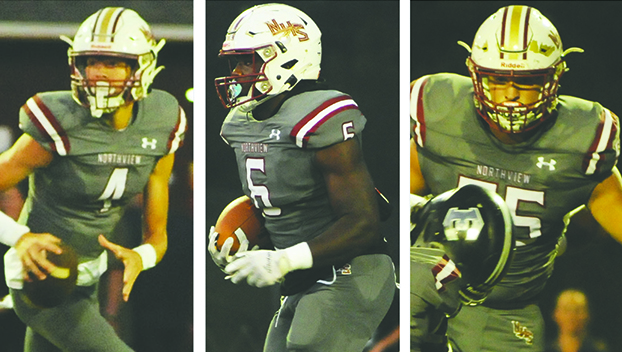 For the better part of their young lives, Northview’s seniors have been a cohesive unit both on and off the gridiron.

The senior Chiefs this season have helped lead the Bratt, Fla. team to an undefeated season, the first time in more than a decade, and have picked up big wins over rivals Flomaton and Baker, Fla., along with Tate, Fla. At present, NHS sits at 8-0 on the season with Escambia County, Ala. coming to town this Friday night.

Quarterback Kaden Odom said what makes this team special is that a lot of the players have been together since they were young.

“We went through little league together,” Odom said. “This corps senior group has been together a while. On and off the field, we’ve had a great brotherhood together, and the coaches really made an emphasis on that this summer, and this year just doing it for one another.”

Running back Jamarkus Jefferson said this group of seniors have helped set the tone for the season.

“We’ve all got that chemistry, and we’re leaders to all the youngers guys,” Jefferson said. “They just feed in to what we got going on.”

Offensive lineman John Michael Ward said the team is confident in their capabilities, and that translates on the field.

All three said that they realized they had a special team after the victories over FHS, BHS and THS.

“I think beating Flomaton and beating Tate the third game of the season made us just sit back and realize we have a special group,” Odom said.

Jefferson said for him, it was after the first game against FHS when the team realized it was going to have a good year.

“After we beat Baker, another team we haven’t beaten in a long time, we knew then that this was our year,” he said.

Ward said after the Tate win, the team embraced the victory and honed it.

“That was like a big whole thing,” Ward said. “You don’t se a 1A beating a 7A. I think that was a game where we were like, ‘I think we have something here. So, let’s just hone it.’”

If there’s one thing Odom, Jefferson and Ward have in common is each have had somebody they’ve looked up to. For Odom and Ward, it was former NHS quarterback Luke Ward. For Jefferson, it was former running back standout Jayden Jackson.

“John Michaels’ bother, Luke, played here and went to Mercer,” Odom said. “We’ve all been around Northview High School. We were on the sidelines at Northview games. I would stay with John Michael and we’d go straight to his house. We’d got to the game wherever it was being played, and we’d be on the sidelines. We wanted to be around those guys. It really gave us the urge and got us ready for up here. We want to do the same thing for those younger fans.”

Ward said Luke helped him understand football, and to get ready to play the game.

“He really just taught me how to be a football player, and how to be hardnosed,” Ward said. “And how you have got to let go of the little things when you need to.”

Jefferson said Jackson was and is like a brother.

“Through my freshman year, he was always telling me when everbody left, it’s going to be me and him,” Jefferson said. “If it wasn’t for him coming through high school, I wouldn’t be where I am. After games, we’re in the weight room; on the field, we’re up on the field trying to get better what we do.”