Summerford: They have a lot to be proud of. They do all we can ask of them. This will help make them better in life, and help them out in the long run. 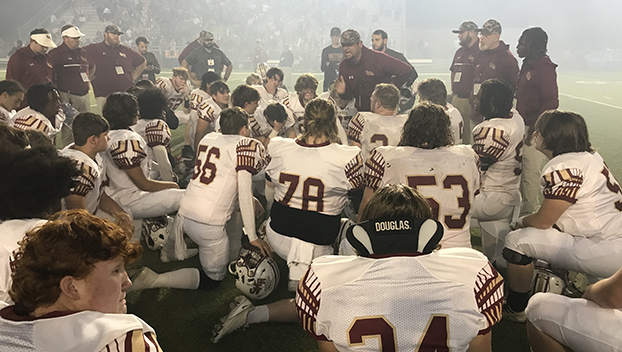 TALLAHASSEE — At the end of the day, hardware came back to Northview.

NHS head football coach Wes Summerford said he is proud of the players for their effort this season.

“The stuff that goes on behind the scenes, and what we’ve been through, we just battled back,” Summerford said. “It wasn’t our night. Hawthorne is a good team. They’ve been here three times.”

Summerford said finishing No. 2 isn’t bad in the state of Florida.

“They have a lot to be proud of,” he said. “This is an awesome atmosphere. We had a great, great tip. I hope they enjoyed it. I think they’ll remember the trip for the rest of their lives.”

The game itself was a defensive battle from the first kick.

Hawthorne drove the field on its first offensive possession, and punched a go-ahead touchdown with 8:05 left in the first quarter. Brian James, a senior, ran in from 5 yards, and with a missed point after, the Hornets led 6-0.

The Chiefs punted on their first offensive series, but held the Hornets on defense. This trend would continue on the Hornets’ next series as they would give up a safety with 17 seconds left in the opening quarter. The safety was a result of a bad snap.

During the second quarter, no team managed to put more additional points on the board, but NHS converted two third down conversions on passes from quarterback Kaden Odom to running back Jamarkus Jefferson.

The Chiefs put together a good defensive series early in the third quarter, and Maliki Haynes had a big catch for a first-down conversion.

Unfortunately, Odom threw a pick with 5:31 left, and Hawthorne’s Keenon Johnson raced it down to the 1-yard line. CJ Ingram punched it in, and the PAT was good.

Summerford said the adjustments that were made for the team included passing to open up the run.

“I think there were some passes open,” he said. “The hard thing about passes is that you’ve got to throw it well and catch it. We just didn’t execute on those.”

In the fourth quarter, the Chiefs didn’t back down on both sides of the ball, playing hard to the final horn.

On the no-quit attitude, Summerford said it’s been like this for this team.

“These kids fight and fight and fight,” he said. “They do all we can ask of them. This will help make them better in life, and help them out in the long run.”

During the postgame ceremony, the Chiefs’ fans gave Summerford and the team a standing ovation.

Summerford said their support will be cherished.

“They’ve backed us through everything,” Summerford said. “They just came out and made us feel special leaving Northview with all their signs on Friday.

“They’re always there for us,” he said.