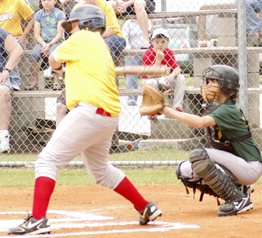 The Warriors were led by Billy Powell who hit 3-for-3 with three singles and three runs scored in the win.

After the Braves opened the game with a run scored by Thunder Jackson (0-for-2), the Warriors made things look easy scoring three runs in the bottom of the first as Powell, Tadd Huskey (2-for-3) and Levi Solomon (2-for-3) all scored to put the Warriors up 3-1.

The Warriors pulled away from the Braves in the bottom of the second as they added three more runs with Powell, Adam Smith (0-for-1) and Jackson Breckenridge made it around the basepath.

After the Braves put up no runs in the bottom of the fourth, the Warriors scored four more runs to go up 10-1 with Breckenridge, Powell, Arri Torrez (0-for-2) and Huskey each scored.

The Braves attempted to make noise with their bats in the final inning as they scored two more runs with Jackson and Joe Jones (1-for-2, HR) scoring on Jones’ two-run homerun.

After the home run, the Warriors sealed their win with the final out.

The Tigers and Arrows battled until the final inning with the Tigers putting up just enough offense to earn the “W.”