The Braves opened the game with three quick runs as Booker, Wall and Jones all crossed the plate.

In the bottom of the first, the Tigers were able to tie the game at three with Tolbert, Overstreet and Magee scoring runs.

The Braves responded in the top of the second with Jones scoring his second run of the game to put them up 4-3.

Momentum switched hands again in the bottom of the second with Brooks, Wilson and Salter scoring to put the Tigers on top for the first time 6-4.

Overstreet took control of the game from the mound for the Tigers in the top of the third as he struck out the Braves’ side.

Overstreet’s pitching helped the Tigers pull away in the bottom of the third as they were able to put the game away 8-4 with Walden and Thorpe scoring the final runs.

Early in the contest, it seemed as if the A’s would walk away with an easy victory as they scored two runs in the first inning as Ryan Johnson and Nytorious Cooler crossed the plate.

In the bottom of the second inning, the A’s extended their lead to three as Flavors scored his first run of the game.

Through the first two innings, the Warriors had trouble offensively as five of their first six outs went down on strikes.

In the third inning, the Warriors found life though as they took the lead 4-3 with Billy Powell, Arri Torrez, Tadd Huskey and Levi Solomon all scoring.

The Warriors held their lead until the bottom of the sixth when Eric Williams ripped a triple and scored on a single by Tristan Agerton to tie the game at four.

After holding the Warriors in the top of the seventh, the A’s came to the plate with victory on their mind as Flavors hit a single and made his way into scoring position during Ryan Johnson’s at-bat.

Johnson put up a sacrifice as Flavors stood on third to help push his team to a 5-4 win. 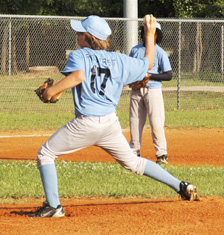 FNB&T Athletics pitcher Bradley Geck throws apitch during his team’s game against the Poarch Creek Indians Arrows on May 11. | Photo by Chandler Myers