Leadership is an important quality in an athlete especially if a team is to be successful.

A leader must possess strong qualities and be able to push their team to victory in the face of adversity.

Northview Lady Chiefs junior catcher Emily Vickrey stood out as a leader for her team during the 2010 season and helped lead them to a 24-4 record and a district championship.

Her role in guiding her team through the season has earned Vickrey a spot on the 2010 Diamond Queens as well as the honor of being named The Atmore Advance’s 2010 Player of the Year.

Vickrey said that being selected as the Player of the Year is a great achievement.

The team that the starting catcher played for is the best in Northview softball history setting a school record for the most wins in a season.

A large part of the success, the Lady Chiefs saw was due in part to the fact that the players have been playing together for several years.

Vickrey said she has been with her teammates since middle school.

Even with so much success, Vickrey and the Lady Chiefs had to overcome adversity and adjust to some things.

Vickrey said that for her the toughest part of the season was learning the team’s new pitcher.

“Our starting pitcher injured her ACL before the season started, and Misty (Doran) had come from Jay, so she became our starting pitcher,” Vickrey said. “It was tough to adjust to a new pitcher, but in the end it proved to be a big blessing. It was tough because the pitching performance usually reflects on the entire team, so it was hard at first especially with Misty being a freshman.”

Adjustments are one thing that Vickrey can take pride in.

Vickrey’s head coach Sammy Day said his catcher is a strong leader when she’s on the field.

“Emily has been a starter for three years,” Day said. “She is really the quarterback of the team. She’ll tell everyone where they need to be, and what they need to do. She is always keeping everybody up.”

One aspect of Vickrey’s leadership that shines is her work ethic not only in games, but practice.

Day said Vickrey is always giving her all and trying to correct things.

“She works so hard at practice,” Day said. “She gets down sometimes when she struggles. Like this year, she had some trouble with her batting, but she worked every day to improve it. As far as catchers go, it’s hard to find someone who can handle pitchers the way she does. Emily has a strong arm and she’s not afraid to try and pick off a runner on first base because she can handle the throw. She’s also a great student and great person.”

Overcoming obsatacles is a task that Vickrey set out to do whenever she had the opportunity.

She said with her hitting she would seek help to see what she needed to fix in everything from her stance to her swing.

“I struggled with batting when the season started,” Vickrey said. “I kept working at it though, and I would call coach Day over to see what I needed to fix in order to be better in the next game.”

For Vickrey, making sure her team is on the right track is always on her mind.

She said that she knows when things are going good or when things need to be kept in check.

“I always do my best to keep the team focused,” Vickrey said. “If we get shaken up, I’ll call timeout and make sure we get our heads back in the game.”

Her good work ethic could be traced to her coach.

Vickrey said playing for Day has taught her that putting forth a strong effort comes with rewards.

“This year, playing for coach Day, I learned that hard work pays off,” Vickrey said. “If you do what you’re supposed to do, it all pays off in the end.”

The effort that Vickrey and her team put forth paid off in a big way all season.

Vickrey said one game in particular was sweet for her because the Lady Chiefs were able to get revenge on an opponent.

“Beating West Florida Tech was big for me,” Vickrey said. “They are the only team that 10-run ruled us all season. We played horrible at their field, but when they came here we were able to beat them and it meant a lot.”

The entire season will stand out in Vickrey’s mind for a long time.

She said she will always remember winning a district championship with this team.

“I’ll remember the fun and the work that my teammates and I put into this season,” Vickrey said. “I’ll always remember being a district champion.”

With her senior season still ahead next year, Vickrey has the opportunity to create more memories with the chance for a district title, and who knows maybe a state championship as well. 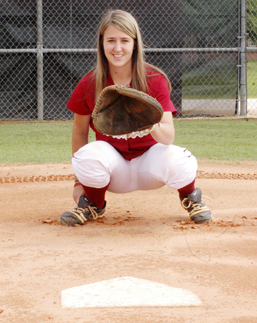 Emily Vickrey is the Atmore Advance's 2010 Softball Player of the Year. | Photo by Chandler Myers

Today’s edition of The Atmore Advance feature the 2010 Diamond Queens consisting of each player deemed worthy of being on... read more