Escambia County Blue Devils senior quarterback Rico Stallworth made a huge decision during the weekend when he announced his commitment to the University of South Alabama Jaguars Saturday morning.

Stallworth was in attendance at a USA defensive camp with his coaches and 14 teammates when he made the decision.

“He made his commitment to USA first thing Saturday,” Heaton said. “Rico said that is where he wants to be, and he is extremely excited about the opportunity.”

Stallworth received a scholarship offer from members of the Jaguars’ coaching staff on May 12 after meeting with defensive coordinator Bill Clark and defensive backs coach Duwan Walker.

Heaton said Stallworth’s commitment came from the way he was approached by Jaguars coaches.

“I think since he received an offer so early from the South Alabama coaching staff and how they went out of their way to come speak with him made it easy for Rico,” Heaton said. “It was special to him, and I think that while he was at the camp he felt at home there.”

Stallworth could not be reached for comment by presstime. 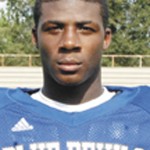 Escambia County Blue Devils senior quarterback Rico Stallworth made a huge decision during the weekend when he announced his commitment... read more