The Atmore eight-year-old Cal Ripken All-Stars fell short of the District 6 championship falling 14-4 to Semmes No. 1 Wednesday night in Semmes.

Atmore struggled to begin the game as their first three batters went down.

Semmes took advantage in their half of the inning as they scored four runs with Bell, McWhorter, Nezet and Andrews scoring runs.

Offensive struggles continued for the Atmore All-Stars as they were able to get Kameron Bowen, Tucker Spence and Joshua Hadley on base, but none of the runners were able to score.

Trailing 4-0 in the bottom of the second, Atmore allowed Semmes to get hot at the plate giving up eight runs to trail 12-0.

Atmore found some fire in the top of the fourth inning when the scored four runs via Chase Bell, Jabe Dawe, Kameron Bowen and Tucker Spence, but it was not enough as Semmes added two runs in the bottom of the inning to end the game in a 10-run rule.

Mims’ eight-year-old All-Stars took it to Atmore’s Cal Ripken All-Stars at Semmes Community Park in Semmes defeating them 10-6 and putting their record in the tournament at 2-2.

Atmore bounced back in the bottom of the fifth with six runs to tie the game, but a four-run sixth inning killed any chance of a victory as Mims won 10-6.

Semmes took full advantage of their trips to the plate as they scored one run in the first, nine runs in the second and two runs in the third inning. Atmore’s lone run came from Tucker Spence in the second inning of the loss.

Atmore’s eight-year-old Cal Ripken All-Stars picked up their second district tournament with a 7-1 win over Theodore at Semmes Community Park in Semmes.

Leaders in the game for Atmore included Sam Smith, Kameron Bowen, Joshua Hadley, Bryant Quimby and Bubba McGowan who all scored runs in the win.

Atmore’s eight-year-old Cal Ripken All-Stars opened up their district tournament at Semmes Community Park in Semmes with a 4-3 victory over Matthews Park. 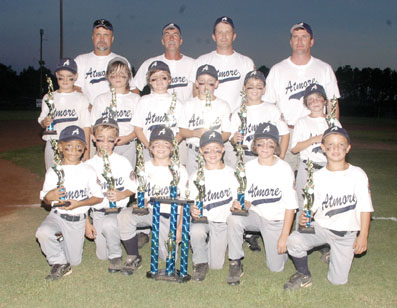