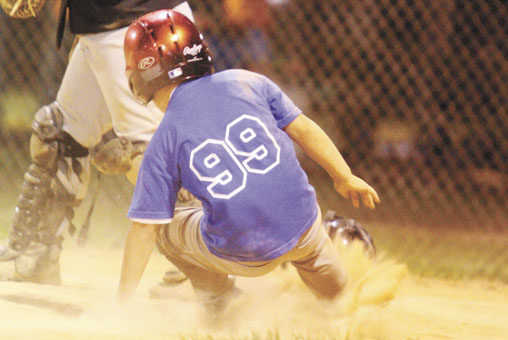 PCI Cub Damon Rolin slides in at home during his team’s win over the State Farm Insurance White Sox on Thursday.|Photo by AJ Beachy

Games this week included match ups between the State Farm White Sox and the PCI Cubs and the Atmore VFW Rangers and the PCI Rockies.

Neither team scored runs in the second or third innings, but the Cubs broke the drought in the fourth inning with Martin and Talan Daughtry (2-for-2, R) crossing the plate to put their team up 8-0.

The White Sox attempted a comeback in the top of the fifth, but could only gain three runs with Bryant Quimby (1-for-2, R), Bubba McGhee (2-for-2, R) and Tyler Renfroe (1-for-2, R) touching home plate, but the Cubs pulled out the 8-3 win.

The PCI Angels and the Atmore VFW Rangers faced off in the Atmore Cal Ripken American League on Thursday night with the Angels coming away with an 11-10 win.

The Rangers added a run in the top of the third to make the score 9-3 with Hobbs scoring his second run of the game.

The Rangers extended their lead to two runs in the top of the fourth with Wilson scoring his second run of the game, but the Angels pulled away in the bottom of the fifth inning with Bell, Bowen and Purvis scoring to win the game 11-10.

After holding the Rockies scoreless in the top of the first, the Rangers took the lead 5-0 with Tray Bradley, Shivann Bhaker, Sam Smith, Jacoby Jones and Chaston Helton all touching home plate.

Trailing 5-0, the Rockies scored one run in the top of the second with Billy Rolin making it around the bases to make the score 5-1, but the Rangers extended their lead in the bottom of the inning with Bradley scoring his second run of the game.

In the bottom of the third, the Rangers scored three more runs with Smith, Matthew Ray and Jones crossing the plate to put them on top 9-1.

The Rockies scored their final run of the game in the top of the fourth with Rolin crossing the plate again to pull his team within seven runs.

In their final at-bat, the Rangers put the game away with four more runs as Bradley, Bhaker, Smith and Ray all scored giving their team a 13-2 win.

The United Bank Warriors picked up a 13-0 win over the State Farm Insurance White Sox on Tuesday night at Tom Byrne Park in a battle of Cal Ripken American League teams.

The Warriors opened the game with three runs as Saviour Kilpatrick, Josh Hadley and Logan Chavers all scored.

Leading 3-0, the Warriors scored again in the top of the fourth with Kilpatrick, Hadley, Chavers, Jadon Torres and Drew Shelly touching home plate.

The Warriors put the game away in the top of the sixth with five more runs as Kilpatrick, Hadley, Chavers, Torres and Shelly each scored again to win the game 13-0.