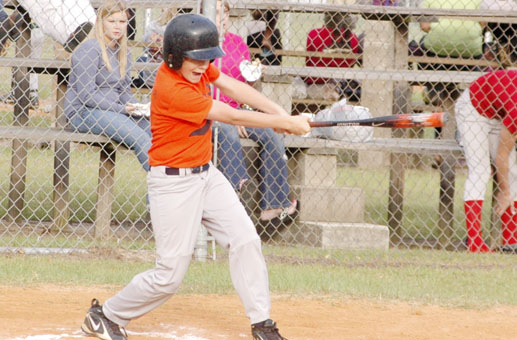 Teams in the Atmore Cal Ripken National League went back to work on Monday night with the PCI Mariners facing off against the PCI Padres at Tom Byrne Park. The Mariners played a steady game for five innings to pick up a 5-2 win over the Padres.

PCI’s Mariners opened the game at the plate and made a quick impact with Dakota O’Barr (0-for-1, R) and Justin Pearson (2-for-3, 2R) scoring runs to give their team a 2-0 lead.

The Padres were able to respond in the bottom of the second inning to cut the lead down to one run with Corey Bailey (2-for-3, R) scoring their first run.

The Padres cut the deficit again in the bottom of the fourth inning this time thanks to a run by Thunder Jackson (1-for-2, R) making the score 4-2.

The Mariners scored the game’s final run in the top of the fifth with Pearson scoring for the second time to put his team up 5-2, while the Padres stumbled in their final trip to the plate to lose.

After a scoreless at-bat by the Tigers, the Cardinals picked up another run with Cordarryl Smith touching home plate to put the score at 4-0.

Neither team scored in the third inning, but in the fourth inning each team got one run as Poole put the Cardinals up 5-0 and Christian Thorpe (1-for-2, R) cut the lead to four runs with the only run for the Tigers.

The Cardinals picked up four more runs in their final at-bat with Cummings, Dagan Hadley (0-for-0, R), Tristan Kilpatrick (0-for-0, R) and Smith each crossed the plate to help their team pick up the 9-1 win.

In Monday night Babe Ruth Softball action there were four games with two games being played by the 13 to... read more