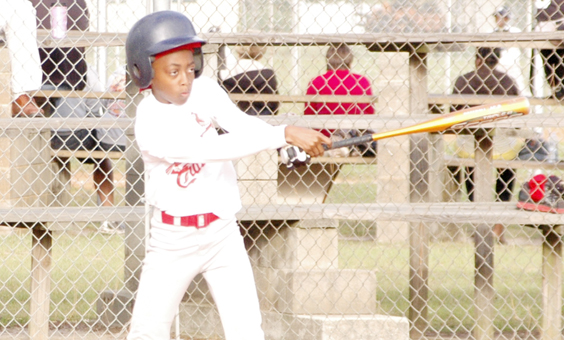 An Atmore Lions Club Cardinal takes a cut at a pitch during a recent game against the Rotary Club Tigers.|Photo by Chandler Myers

Rashaan Flavors was the hero for the First National Bank & Trust Athletics as he scored three runs in the A’s 8-5 win over the PCI Padres on Monday night in Atmore Cal Ripken National League action at Tom Byrne Park.

Flavors (2-for-2, 3R) opened the game with a leadoff walk and scored on an error to put the Athletics on top 1-0.

After a scoreless second inning, Flavors went back to work in his next trip to the plate and ripped a single, which was followed up by Jamaya Frye’s (2-for-2, R) single that got Flavors across home plate for his second run of the game.

Trailing 2-0, the Padres finally found some offense in the bottom of the third with Thunder Jackson (1-for-2, 2R) and Tyler Sells (0-for-0, R) making it around the base path to tie the game up at two.

The Athletics took the lead back in the top of the fourth with Gayton Thames (1-for-2, HR, 2R) scoring on a solo home run and Eric Williams (2-for-3, 2R) scoring on an error by the Padres. With the scores, the A’s led 4-2.

In the bottom of the inning, the Padres picked up three runs to take the lead for the first time as Corey Bailey (0-for-2, R), Jackson and Sells each crossed the plate.

Facing a 5-4 deficit, the Athletics came to the plate looking for a miracle and found one as they scored four runs to pull ahead 8-5 as Flavors, Frye, Thames and Williams each touched home plate.

The Padres were unable to find any luck in their final at-bat giving the A’s the three-run victory.

The Cardinals extended their lead to 13 in the top of the third inning as Poole, Flavors, Tatum and Hadley each made their way around the base path.

After another scoreless at-bat by the Mariners, the Cardinals pushed their lead to 20 runs as Jared Gibbs (0-for-3, R), Hadley, Poole, Flavors, Tatum, Cummings and Daren Abrams (1-for-1, R) all touched home plate.

The Mariners finally put a run on the board in the bottom of the fourth, but it was to little too late as they fell 20-1 to the Cardinals.

In a Monday night match up at Tom Byrne Park, Greenlawn Home Care crushed the Atmore Utilities Board 10-1 in... read more