The First National Bank & Trust Athletics closed out the night with a thrilling game against the PCI Mariners winning 10-4, while the PCI Padres edged out the Atmore Rotary Club Tigers 7-6. 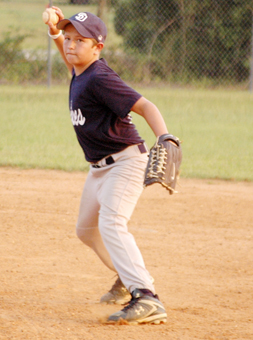 PCI Padre Asa Lane prepares to gun down a runner during his team’s win over the Atmore Rotary Club Tigers Thursday night.|Photo by Chandler Myers

Consistency was the name of the game for the First National Bank & Trust Athletics as they scored in every inning on their way to a 10-4 win over the PCI Mariners Thursday night.

The A’s scored multiple runs in each inning and held the Mariners off of the base path to pick up the win.

After holding the Mariners scoreless in the bottom of the first, the A’s went back to the plate and added four more runs with Josh Booker (1-for-1, 2R), Rashaan Flavors (2-for-2, R), Frye and Cooler crossing the plate to increase the A’s lead to eight runs.

The Mariners cut the deficit they faced to seven runs in the bottom of the second with Tyler Jackson (0-for-0, 2R) touching the plate to put them on the board.

Two runs in the top of the third put the A’s ahead 10-1 as Jabe Dawe (0-for-0, R) and Booker scored the final two runs for the visitors.

The Mariners pushed for a rally in the bottom of the third, but could only manage three runs with Justin Pearson (0-for-1, R), Cole Wynn (0-for-1, R) and Jackson crossed the plate, but the final three outs would give the A’s the win.

The PCI Padres put up a strong battle against the Atmore Rotary Club Tigers helping them earn a 7-6 win Thursday night at Tom Byrne Park.

With a 6-6 tie heading into the final inning, the Padres found a way to get the go ahead run across the plate in the top of the sixth.

The game started slow for both teams with neither scoring in the first two innings, but the Padres were able to strike first with Corey Bailey (0-for-3, R) scoring in the top of the third inning.

Three more runs for the Tigers in the bottom of the fourth gave them the lead 6-4 as Jordan Britt (0-for-3, R), Wiggins and Thorpe all made it on base and across home plate.

The Padres tied the game at six in the top of the fifth with Hamilton and Sells both scoring their second runs of the game and held the Tigers scoreless in the bottom of the inning.

Daylon Wooten (1-for-4, R) got on base with a single in the top of the sixth and scored what turned into the winning run as the Padres went ahead 7-6 and stopped the Tigers in the bottom of the inning to win the game.