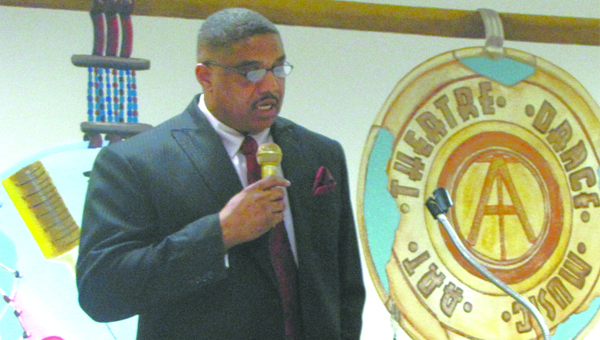 Members of the 2012 Florida Class 1A State Champion Northivew Chiefs’ football team, cheerleading squad and dance team were recognized during a banquet Monday night in the school’s cafeteria.

“It’s a great time to be a Northview Chief,” said coach Sid Wheatley. “It was a very special season.”

Wheatley thanked his fellow coaches, players and the community for the championship run after eight years at the school and four years as head football coach.

“I have seen this community grow,” Wheatley said. “No one follows programs like Northview does – like this community. Friday night is an event.”

He used the championship game in Orlando as an example of the community support.

“The Citrus Bowl was filled with 2,000 people from the Brat community, Molino and Davisville,” he said. “It means a lot and you mean a lot to us.”

Pleasant, a two-time Superbowl winning defensive end, told the players that there are certain traits that make up champions.

He said not to worry so much about role models, but instead worry about real models, which are family members, teachers and others who can impact life directly.

As an example, Pleasant used his mother, who assumed a fatherly role as well when his dad died when he was 2 years old. He recalled how she made him go to church on Sundays and molded his character.

“She was firm with me,” he said. “She taught me how to respect authority.”

Pleasant reflected on his time at Tennessee State and how it prepared him for life in the NFL and beyond.

Among the traits for a champion he told the players and their families in attendance to “take care of your bodies.”

“Don’t burn the candle at both ends,” he said.

“Relationships are important,” he said. “Don’t burn your bridges. I couldn’t be coaching in the NFL without relationships.”

He also touched on the importance of character and how it would help later in life.

The former third round pick of the Cleveland Browns told the players to continue to act like champions off the field in every day life.

“You are champions,” he said. “Conduct yourselves like champions. Don’t live your life as a chump.”

Wheatley and the coaching staff also recognized the team and gave out awards for individual players.

Wheatley and the coaching staff also gave an award to the senior class. As a class, the players have won 37 games in four years.
“We’re going to miss these guys,” Wheatley said. “It’s now up to our younger guys; learn from what they showed you.”

The Atmore Christian School Rams’ baseball team is off to a 2-0 start after beating Calvary Christian 12-2 in a... read more