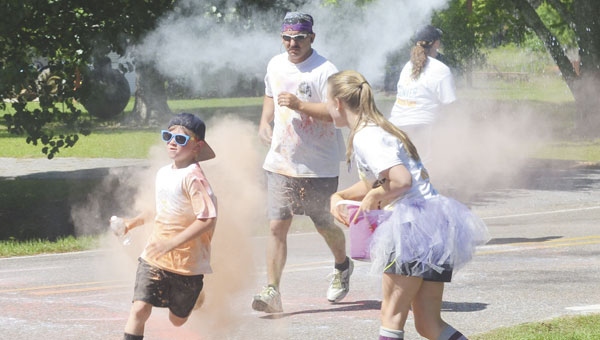 Runners got one last blast of color as they rounded the final turn before the finish line at Saturday’s benefit color run in Poarch.

Some of the words that usually describe a road race include “exhausting” and “never-ending.” The words “colorful” and “inspiring” don’t typically come to mind, but they were perfect words to describe the two-mile run that took place Saturday morning in Poarch.

A total of 293 runners participated in a “color run” to benefit Denver Shuttlesworth, a 15-year-old member of the Poarch Boys & Girls Club. Shuttlesworth has been diagnosed with neuroblastoma, a type of cancer that affects the nervous system.

The club’s T.R.A.I.L. (Together Raising Awareness in Indian Life) program helped organize the unique event. It is called a color run, because the runners are regularly doused with colored powder at several stops along the track.

By the time the runners are finished with the race, they are not only sweaty and tired, but also brightly covered in the colors of the rainbow. After the run, additional funds were raised for Stallworth’s family through a silent auction and concession sales.

Organizers said that the club hopes the color run will become a regular event, and each year it might be held for a different charitable cause.

The top three in the kids division were Ryder Spence in first place, Christopher Johnson in second place and Daughtry McGhee in third place.