Back from Boys, Girls State 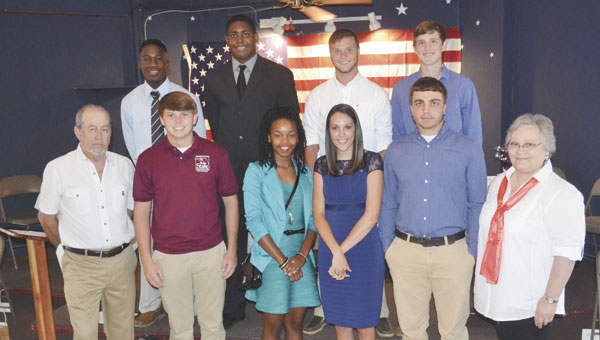 The seven boys and three girls were the guests of honor at a dinner held Tuesday night at the Post 90 headquarters. In June, they attended Boys and Girls State, which are multi-day programs held at an Alabama university and which teach the students citizenship and leadership skills.

During Boys State or Girls State, students play a role in a mock “government,” which allows them to learn about the nation’s laws and political system through a hands-on experience. Students fill a variety of roles at the city, county and state levels in their pretend governments, ranging in everything from governor to city director of parks and recreation.

Tuesday, the high schoolers told about their experiences and the positive lessons they learned.

Brantley said he chose to run for the state board of education, because his mother is a teacher and he was curious to learn more about the school system. He said he gained a lot of confidence from his trip to Boys State, because it was the first time he had been away from home for such a long time.

“I feel like it has made me a new person,” he said.

While students mentioned the government background of their Boys and Girls State experiences, others noted that it was just enjoyable to get the chance to meet so many young people from across the state.

Felder said he would always remember playing Ultimate Frisbee with some of his new acquaintances.

“It was a fun experience,” he said.

Simpkins joked that she learned the proper way to say the pledge of allegiance, and discovered that she had not been doing it correctly previously. She said she enjoyed her time working with the fictitious city of “Redstone,” where she served as the city revenue commissioner.

“I had a wonderful time and it was definitely something I will never forget,” she said.

The students also were treated to a special guest at Tuesday’s dinner. State Department Commander Wayne Stacey, an Atmore native, spoke about the importance of programs like Boys and Girls State.

“These are the future leaders of America, and we need to take care of these people who will lead us one day,” he said.