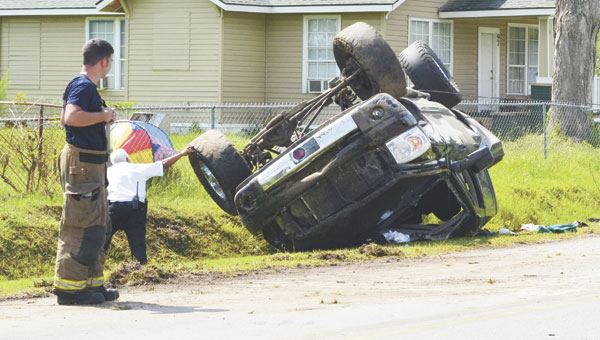 First responders were kept busy Monday afternoon, as they were called out to two crashes that involved overturned vehicles.

1 hurt after truck skids off road

According to an Atmore Police Department incident report, a 44-year-old Atmore man was injured Monday afternoon in a crash on Jack Springs Road.

Roy Lee Patterson, 44, of Atmore, was driving a 2007 Dodge Ram 2500 and was traveling northbound on Jack Springs Road at approximately 2:27 p.m., according to the report. Patterson appeared to lose control of the vehicle on the wet road between the Short Street intersection and the Sowell Avenue intersection. The truck then overturned into a ditch.

Patterson was injured in the crash, and was transported by helicopter to Sacred Heart Hospital in Pensacola.

According to Mike Burke, public relations director at Sacred Heart Hospital, Patterson was discharged from the hospital Monday night.

A vehicle overturned after a crash on Church Street at 4:15 p.m. Monday afternoon, but nobody was injured.
According to a report from the Atmore Police Department, 58-year-old Kathy Porterfield of Uriah was driving her 2005 Nissan Xterra north on Fourth Avenue when she stopped at the stop sign at the intersection of Fourth Avenue and Church Street.

Porterfield reportedly told officers that she thought it was a four-way stop, and proceeded into the intersection. Her vehicle collided with a 2005 Buick Rendezvous, being driven on Church Street by 67-year-old Dale Bernice Keyes of Brewton.

Keyes’ vehicle overturned on its side as a result of the crash. Neither driver was injured, and no charges were filed.

Man gets life in prison for rape