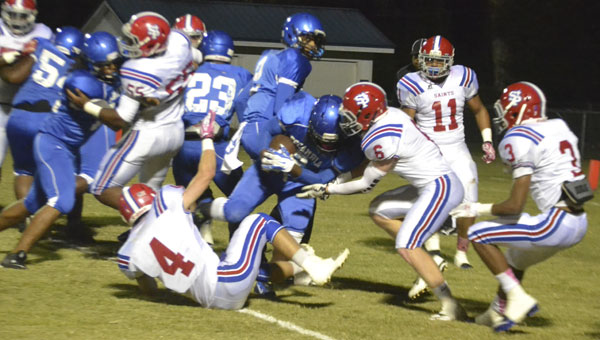 Escambia County High School broke out to an early lead against No. 1 St. Paul’s on Friday night, but ultimately fell by a 49-12 score.

ECHS running back Gaetyn Thames scored a 1-yard touchdown run with 6:55 left in the first quarter. The Blue Devils missed the extra point, but still led 6-0.

St. Paul’s later moved ahead 14-6 but the Blue Devils responded with another scoring drive. ECHS quarterback Marquis Brooks completed a 4-yard touchdown pass to Emanuel Etheridge with 6:18 left in the second quarter. ECHS failed at the two-point conversion, but cut the Saints’ lead to 14-12.

The Saints led 21-12 at halftime and pulled away in the second half.

For more on this story, see the Wednesday, Oct. 22, edition of The Atmore Advance.

Members of the Atmore Lions Club meet with ECHS administrators and Ruth Harrell of the Coalition for a Healthier Escambia... read more