Citizens ‘locked up’ for a good cause 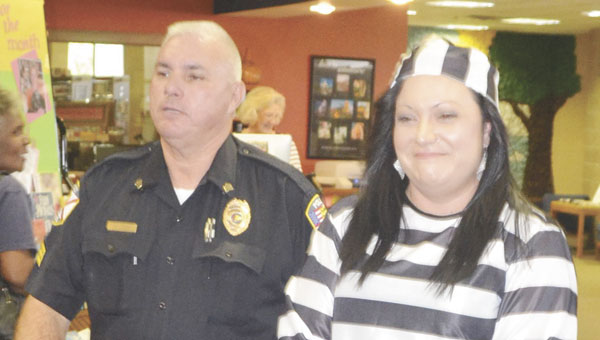 Katie Harrison is “arrested” by APD Sgt. Arthur Odom at the library Tuesday.

Ten Atmore citizens spent time in “jail” Tuesday, as they participated in a fund raiser for the 2015 United Fund of Atmore campaign.

Those citizens were a part of the annual “lock up” event, in which community members volunteer to be “arrested” and held at a makeshift “jail” at Atmore City Hall. They must stay in that jail until they raise $500 in bail money, which goes toward the United Fund.

Organizers said late Tuesday that they had collected right at $10,000, a considerable portion of the Fund’s overall campaign goal of $60,000.

“We had a great response this year,” said 2015 United Fund chairman Bub Gideons. “We started out strong with the mayor getting ‘arrested’ first. A lot of people were joking that they’d pay money to keep him locked up!”

In addition to Atmore Mayor Jim Staff, other citizens who volunteered for the lock up were: Coleman Wallace, Nancy Helton, Dr. Anthony Morris, Dennis Fuqua, Elliot Faircloth, Katie Harrison, Robin Allen, Ben Odom and Myrna Monroe. Others did not get “arrested” but turned themselves in throughout the day.

Harrison, who was working at the Atmore Public Library when she was “arrested” by Sgt. Arthur Odom of the Atmore Police Department, said her friends teased her when they heard she would be put in jail.

“I had a friend from out of state who told me that he’d send a moneygram to keep me in jail till Friday,” said Harrison, who was booked on the charge of “overdue library books.”

“It’s a great atmosphere of community involvement,” Gideons said. “We appreciate the city and the Atmore police department for partnering with us to make this fun day happen.”

The United Fund of Atmore supports 17 agencies and all the money stays in the community. Some of the supported agencies include youth sports leagues, the library, Pride of Atmore/Save the Strand and the Atmore Area Christian Care Ministry.