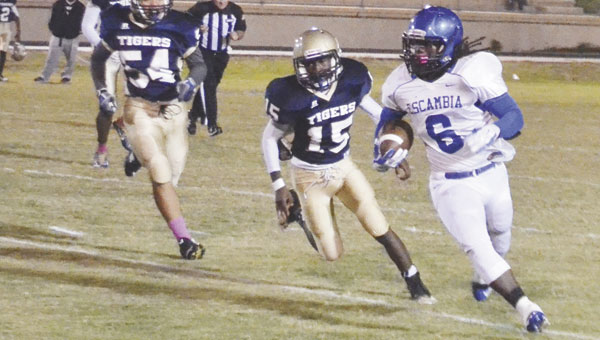 ECHS running back Gaetyn Thames breaks away from Monroe County defenders on Friday night. Thames scored four touchdowns as the Blue Devils won their first game of the season, beating the Tigers by a 42-30 score.

MONROEVILLE — Escambia County’s Blue Devils didn’t let an early 12-point deficit bother them Friday night, as they bounced back to win their first game of the season, a 42-30 victory at Monroe County.

“It was definitely a positive for us to come back, even though that early deficit was of our own doing,” ECHS coach Royce Young said. “It’s obviously been a long time coming for these guys to enjoy a win, but hopefully it will motivate our younger players to come back and work hard in the offseason.”

ECHS (1-9) fell behind 6-0 early in the first half, after fumbling the opening kickoff and allowing the Tigers to recover. Maurice Woody scored on a 2-yard run and the extra point was blocked, giving Monroe County a 6-0 lead with 8:07 left in the first quarter.

The Blue Devils responded with a six-play, 67-yard drive of their own. Gaetyn Thames scored on an 8-yard run and a two-point conversion pass failed, tying the game at 6-6 with 6:10 left in the first.

Monroe County scored two more touchdowns in the first quarter, taking advantage on an ECHS fumble to set up the Tigers’ second score, and going up by an 18-6 lead with 2:10 left in the first.

ECHS responded with a scoring drive late in the quarter, with Thames running for a 22-yard touchdown and adding the two-point conversion to cut Monroe County’s lead to 18-14 as the first quarter expired.

The Blue Devils took their first lead of the game in the second quarter, following a fumble recovery. On the very next play, Thames broke away for a 58-yard touchdown run with 3:30 left in the first half. The two-point conversion failed, but ECHS still led 20-18 — a lead they would hold until halftime.

In the third quarter, ECHS quarterback Marquis Brooks completed a 17-yard touchdown pass to Devante Lee with 7:09 left. Thames added the two-point conversion and increased the Blue Devils’ lead to 28-18.

Monroe County battled back with a touchdown in the third quarter, and the Blue Devils’ lead was cut to 28-24 heading into the fourth.

Thames scored on a 56-yard touchdown run with 2:20 remaining in the game, and Brooks added the two-point conversion to put ECHS ahead 36-24. But again, the Tigers responded to cut the lead back to 36-30 with 1:30 left.
Monroe County attempted an onside kick, but it was easily recovered by the Blue Devils. On the very next play, Thames broke away from the defense for a 59-yard touchdown run to put the game away.

“We knew that we would let Gaetyn be our workhorse tonight,” Young said. “We were able to make some good adjustments on defense at halftime, and that made a lot of difference.”

Cougars improve to 8-0 after shutout