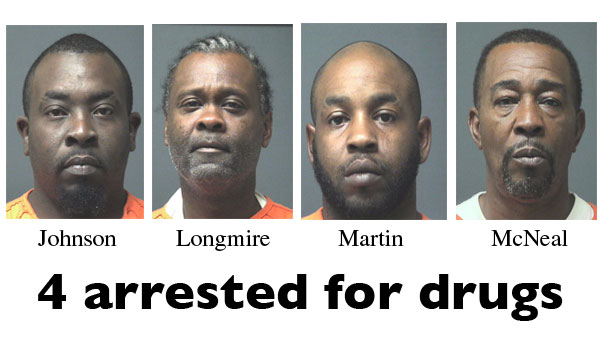 Four Atmore men were arrested on drug charges on Thursday after sheriff’s deputies and Drug Task Force agents searched for drugs at an Atmore residence.

According to information from the Escambia County Sheriff’s Office, four men were arrested and charged during the incident. Their charges and bonds were as follows:

According to ECSO officials, agents with the 21st Judicial Drug Task Force and sheriff’s deputies served an arrest warrant Thursday on Longmire, at 213 Maxwell St., for the charges listed above.

While at the residence, law enforcement officials discovered that Martin was in possession of seven packs of synthetic marijuana, and he reportedly attempted to flee on foot.

After a short pursuit, Deputy Preston Hill and Deputy Michael Sanderson were able to apprehend Martin. He was then arrested and charged.

While at the residence, the officers were given permission to search the vehicles in the yard. DTF agents reportedly found more than one pound of marijuana in Johnson’s vehicle.

All four suspects were booked into the Escambia County Detention Center.

Austin Gray An Atmore man was arrested Friday and is facing several drug charges. According to officials at the Escambia... read more