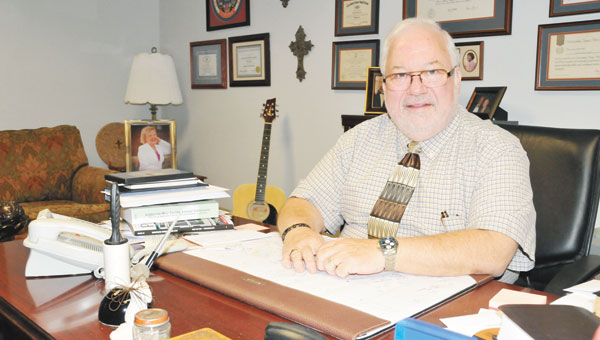 A former pastor of Atmore First United Methodist Church was recently named the District Superintendent of the Pensacola District.

“I am sad that I’ll be leaving the church in Andalusia, but I’m excited about this appointment,” Trent said.

In his new job, Trent will oversee approximately 50 churches within the district and close to 70 ministers. As district superintendent, Trent’s oversight reaches across three Florida counties and one Alabama county — Baldwin in Alabama; and Escambia, Okaloosa and Santa Rosa in Florida.

Trent has been in the ministry for 43 years, and has preached in Andalusia for the past 11. He’s served in several churches within the conference, and his preaching stints include Montgomery, Enterprise, Atmore, Pensacola, Dothan and Andalusia.

Trent said he’ll still preach, but it’ll be at different churches every Sunday.

When asked what he’ll miss the most about preaching in Andalusia, Trent said it’s the “loving people” at FUMC.

Trent said there are only a few people who get selected to be superintendent.

“I just didn’t think I’d be the one that was selected,” he said.

Trent said he was contacted about this appointment on Fri., March 13.

Trent’s first day on his new job is July 1.

Trent and his wife, Linda, will move to Pensacola in the near future.

In his email announcing the appointment, Bishop Leland said, “Andalusia FUMC will receive a new appointment in the coming weeks.”

A Bratt, Fla., man believes that he may be the victim of an identity theft crime. Richard Benner said that... read more