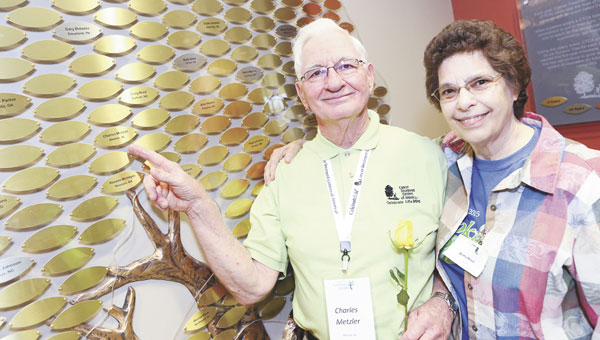 Celebrate Life 2015 celebrant Charles Metzler of Atmore and his wife, Bertha, stand next to the “Tree of Life” located in Cancer Treatment Centers of America at Southeastern’s lobby. Celebrants’ names are inscribed on the leaves of the tree, which serves as a lasting reminder of the courage and strength of cancer survivors.

An Atmore resident recently reached a significant milestone in his battle against cancer.

The Cancer Treatment Centers of America (CTCA), at Southeastern Regional Medical Center in Newnan, Ga., honored Charles Metzler of Atmore and 11 other cancer survivors at a “Celebrate Life 2015” event on Friday, March 20, in Newnan.

Metzler and the 11 other survivors have reached their fifth year of surviving cancer, and have undergone treatment at CTCA.

During the Celebrate Life event, each survivor was honored with a tree planted in his or her name, to symbolize a fighting spirit. In addition, each celebrant’s name was also added to the “Tree of Life” located in the hospital lobby, as a lasting reminder of their courage, and to serve as an inspiration for others who fight cancer.

Finally, the celebration included a release of white doves, to symbolize each survivor’s courage.

Metzler was first diagnosed with esophageal cancer in 2008, and began treatment at CTCA. He has undergone radiation therapy, chemotherapy and surgery.

Metzler, who moved to Atmore in 1982 and managed the Best Western motel for 24 years, said that he received an initial negative diagnosis from a doctor in Mobile, who told him he had only a “40-percent chance of survival.” Metzler talked to his brother, a hospice chaplain in Birmingham, who told him about CTCA.

At that time, CTCA did not have a nearby location, and so Metzler would regularly make the trip to Illinois to see his doctors.

“The very first time I arrived, I felt a peace and really got the feeling that these people cared about me as a person,” Metzler said.

He continued undergoing treatment until two years ago, when one of his doctors told Metzler that she wouldn’t be able to see him anymore because she was being transferred to a new CTCA facility in Georgia.

“I asked if I could transfer with her,” Metzler said, with a laugh. “I’ve been going to Newnan now for two years.”

Since the initial cancer diagnosis, Metzler has still been able to spend quality time with his four children, 14 grandchildren and his church community, Mennonite Christian Fellowship. He used to visit doctors every other week, but now only has to visit CTCA once a year for treatment and diagnosis.

Metzler said that he truly enjoyed the Celebrate Life event.

CTCA at Southeastern opened its doors on Aug. 15, 2012, and has served more than 3,500 patients from throughout the Southeast.