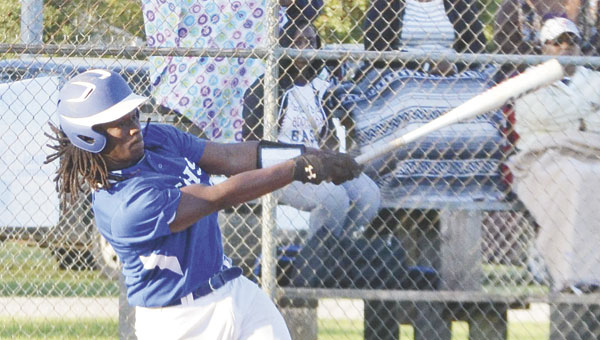 ECHS player Gaetyn Thames follows through on a single in the first inning of the Blue Devils’ 5-4 win over Jay on Friday. Thames was 1-for-3 and scored a run in the victory.

The Escambia County High School Blue Devils baseball team earned a split in its two games before the start of spring break.

ECHS lost at Flomaton on Monday, March 23, but bounced back to earn a win Friday night against visiting Jay, by the score of 5-4.

ECHS coach Michael Parker said he has been excited by the progress of the Blue Devils, who were 7-8 overall and 2-0 in area play after the win over Jay.

“We’ve had some good stretches this season,” he said. “With our pitching, we feel like we can be in any game against any opponent.”

“We feel like we have as good a shot as any team,” said Parker, who is in his second season of leading the Blue Devils.

The Blue Devils scored four runs in the bottom of the seventh, to win an exciting game against the visiting Jay Royals on Friday night at Tom Byrne Park.

In the seventh inning, Jay pitchers hit three ECHS batters to load the bases with two outs and the Blue Devils down 4-1.

Tanner Smith laced a double to left field, scoring two runs. The left fielder bobbled the ball, allowing Devon Robinson to score on the play as well, and letting Smith advance to third base with the game tied 4-4.

During the next at-bat, Smith broke to steal home and the Jay pitcher was called for balk, allowing the winning run to score.

“It was kind of déjà vu for us,” Parker said. “In the loss at Flomaton, we had the bases loaded with two outs and Tanner was up at the plate, but he hit a fly ball for the final out. He got another chance against Jay and came through with a huge hit.”

Smith also gave a strong performance on the mound Friday. He worked six innings, allowing eight hits and four runs, but only one earned run. Smith struck out 10 batters and walked two.

Devante Dailey earned the win, pitching the final inning and allowing one hit but no runs.

Smith was 1-for-3, with two RBIs and a run scored, and Carlos McNeil and Bobby Ephraim were each 1-for-3.

Against Flomaton on Monday, March 23, ECHS took an early 1-0 lead after the first inning. The Hurricanes scored three runs in the second inning, and ECHS cut into the lead with one run in the fifth.

Smith pitched all seven innings in the hard-luck loss, striking out 17 batters and walking four. He allowed four hits and three earned runs.

The Blue Devils had a strong offensive performance, finishing with 10 hits. Smith was 3-for-4 and McNeil finished with two hits.

Five other players had one hit each — Thames, Robinson, Dailey, Bobby Ephraim and Rashaan Flavors.

In a home track meet Friday for the T.R. Miller Tigers, both the girls and boys teams came away with... read more