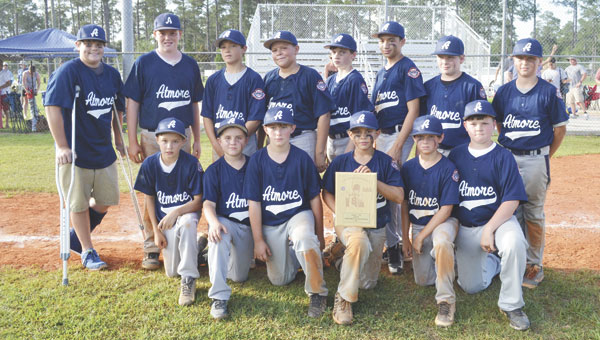 Atmore finished undefeated atop the winners’ bracket, and played one-loss Andalusia in a game Sunday afternoon. Although Andalusia won that game 6-5, it was Atmore’s first loss and therefore the teams had to play a final game to determine the champion.
In that second game, Atmore prevailed with a 7-0 shutout.

Ten of the players and all three coaches were also members of last year’s 10-and-under All-Stars, who finished in second place at the 2014 state tournament.

Atmore will play in the state tournament at Matthews Park in Mobile, beginning Friday, June 26.

Other tournament scores were:

Atmore scored four runs in the second and three runs in the fifth, on the way to a 7-0 victory in the deciding game Sunday.

Andalusia and Atmore played a back-and-forth game early Sunday afternoon, with Andalusia eventually prevailing by a single run to stay alive in the District 7 tournament.

Down to its last three outs, Atmore staged a rally, scoring one run in the top of the sixth and putting runners on first and third with one out. However, the next batter hit a pop-up on the infield, and the runner on first base was doubled up to end the game.

Buck scored two runs for Atmore, and Brunson, Stevens and Price each scored once.

Atmore topped Monroe County 5-2 early Saturday morning, giving Monroe County its first loss of the tournament and advancing Atmore to the championship round.

Atmore scored two runs in the first inning, but Monroe County responded with two in the fourth to tie the game. Atmore moved ahead for good with three runs in the fifth inning.

Five players scored one run each for Atmore — Brunson, Buck, Price, Odom and Ragan. Price and Odom had back-to-back doubles in the fifth.

Atmore jumped out to an 8-3 lead after four innings Friday night, and then had to hold off a late Flomaton rally to win its opening game of the district tournament.

Flomaton scored four runs in the top of the sixth inning, but Atmore was able to hang on for the one-run victory.

10U All-Stars finish 3rd at district