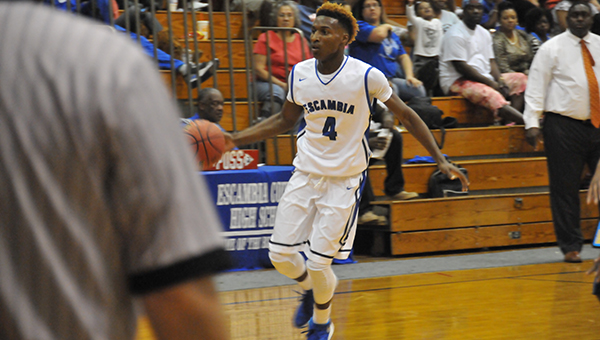 After a somewhat slow start, the Escambia County Blue Devils regrouped in the second half and beat Clarke County 41-27 in their home opener earlier tonight in the Cornell Torrance Gymnasium.

With a 20-17 lead at halftime, the Blue Devils came out firing in the third period, outscoring the Bulldogs 17-8.

“We started to pick it up in the second half,” ECHS head basketball coach Bruce Craig said. “It was good to win our first home game.”

Craig said his players were pretty excited to be able to play in front of the familiar crowd, adding that he’s looking for the players to jell better.

One of the keys in the win was the Blue Devils effectiveness moving the ball around on the court.

Craig said he runs a motion offense, which keeps the ball moving and allows space to open up for drives to the bucket.

In the third period, junior guard Devon Robinson got the scoring going on a nice jumper for a 22-19 advantage. Junior forward Chillé Ford added a jump shot a short time later to increase the lead.

With around 3:13 left to go in the period, Robinson was on the other end of a good pass from Devonté Lee that set up an and-one situation. With the missed free shot, the Blue Devils led 31-22.

Senior forward Anthony Fountain added a 3-pointer a little later to give his team a healthy 37-22 cushion going into the fourth, where not much took place on the scoring end of things.

ECHS went on a 8-0 run in the first period that led to a 9-9 tie going into the second. Junior guard Eric Williams nailed a 3-pointer with 2:15 left to cut the Bulldogs’ lead to three at 7-4.

Ford ended the run on the good end of an and-one play to give his team its first lead of the game.

ECHS head girls coach Jerome Webster said despite the loss, the girls played better than last week, when they lost two games at the McGill-Toolen tournament.

“We played better in the second half than the first half,” Webster said.

Webster said the girls will be making some needed adjustments to get ready for December play.

ECHS hits the road on Friday for a regular season contest at Monroeville.

Northview put up a good defensive battle against Vernon tonight, but came up short, 8-7 in the regional semifinals. |... read more