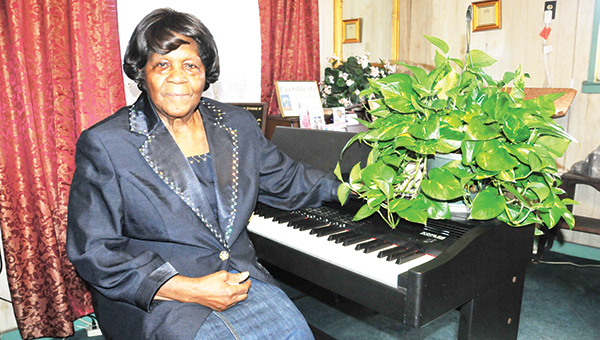 Holmes has held many jobs in her life

Holmes moved to Atmore from Wilcox County in the 1940s.

“When I first came to Atmore, I was glad to come from the country,” Holmes said.

In fact, Holmes moved from McWilliams, Ala., which is near Pineapple.

Now in her 80s, Holmes said that she didn’t have an occupation she specialized in as she went from job to job trying to find a better place.

“My first job was working at the Ford Furniture Co.,” she said, sitting in her Sims Street home. “They had a furniture store in Atmore. I had to clean the furniture.”

After about a year or two, Holmes moved on to work at a restaurant washing dishes. Then she went on to work at the boarding house, making biscuits, salads and cornbread.

Holmes cooked for another year or two, and then worked at Smith’s Bakery on Main Street.

From the bakery, she went to the Farmer’s Café.

“I was like a butterfly trying to find a better place,” Holmes said.

“It was nice, nobody pushed you,” she said about the work.

In 1953, Holmes left to go to New Jersey and worked at two separate factory jobs. She came back to Alabama after her husband was killed, and has been in Atmore ever since.

For her longest stint, she worked for Gulf Coast Home Health as a traveling nurse’s aid. Holmes traveled all around the area, including in Baldwin County and Monroeville.

She worked for the state of Alabama until the 1960s, when her hip started hurting her, forcing Holmes to retire.

While she may have retired, it didn’t stop Holmes from getting involved in the community as she even hosted prayer meetings at her house.

“I was a member of the Chamber of Commerce, and traveled with the Democratic Conference and worked with the NAACP,” she said.

Because of her commitment to help others in the community, Holmes received the Dr. Martin Luther King Jr. Community Service Award in 2015 from the Concerned Citizens of Atmore.

Holmes said her motto in life has been to help people in need.

“All I wanted to do was help somebody,” she said. “I have a heart for helping people. I love people so much I just want to see them saved.”

Prayer goes further than anything, she added.

“I devote myself to prayer daily because I like it,” Holmes said. “I’ve seen a lot of folks saved in this house. This house is a prayer highlight.”

Murray Johnson was given the Lifetime Achievement Award at the Atmore Area Chamber of Commerce banquet last Thursday. Johnson is... read more