A William C. Holman Correctional Facility inmate was found unresponsive in his cell on Oct. 18, according to the Alabama Department of Corrections. 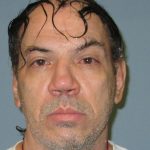 According to a release, at approximately 5:05 a.m., correctional officers discovered inmate Ricky Gilland, 46, of Vinemont, unresponsive, in his cell.

Officers entered the cell with medical staff and discovered Gilland was deceased, the release said.

No foul play is suspect at this time, according to the ADOC.

The final cause of death is pending autopsy results.

The investigation is ongoing and additional information will be provided at its conclusion.