BACK TO THE CHAMPIONSHIP 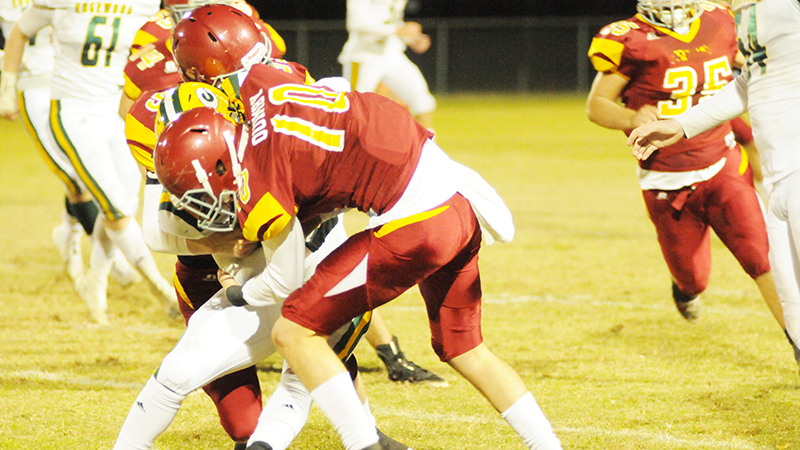 The motivation has always been there.

Escambia Academy will play in its fourth-straight AISA state championship game next week after dispatching Edgewood 49-7 tonight in the Class 2A state semifinals in Canoe.

The Cougars dominated from the start, scoring on each of their possessions except one to take a 28-7 lead at halftime. EA tacked on two additional offensive and one defensive touchdown in the second half.

With this victory, EA advances to face Autauga Academy — for the fourth straight year — in the state championship game.

EA senior linebacker Bryant Quimby said it feels great to make it back to the championship game.

“It feels surreal, honestly, to be a part of this program, to be a part of everything that’s been going on,” Quimby said. “All of the doubts we had been having, it’s great to prove everybody wrong.”

EA head football coach Hugh Fountain said the aim tonight was to come out and take care of business.

“I think the boys were focused on playing well,” Fountain said. “You always do a challenge, when the year before they (Edgewood) played us very hard. There was some internal motivation for us. We were disappointed with how we let them back in the game (last year in a 39-31 win), but this year, we got a stand right there before the half.

“In the second half, we were just focused on what we had to do,” he said. “You have to take your hats off to the players. It really wasn’t just one player. Everybody did their jobs as a team, and it was a good night for us.”

Quimby caught an early interception, and the helped set up a 69-yard touchdown rush from Shannon Wheat with 9:41 left in the third quarter.

The Cougars (9-3) tacked on six more with a 46-yard pick six return from Petey McCants, a senior.

In the fourth quarter, Wheat added a 26-yard scoring rush with 8:12, and with the extra point by Orlando Medina, EA led by 42.

Fountain referred to a defensive stop in which the Cougars held Edgewood on fourth down and one at the goal line.

On making it to the state championship game four years in a row, Fountain said it’s admirable.

“They’ve been a good program,” the coach said about Autauga Academy. “It’s been us and them for a couple of years now. Internally, we were motivated to get back to the championship game. We trusted the the boys to not take this for granted because you don’t know how long this is going to last, and how many championship games you gonna make in a lifetime.”

Quimby said the team next week must focus on the present, and not worry about last year’s 49-0 loss to AA.

“We all have got to do our job, and not focus on the past,” he said.

Senior linebacker Jason “Jabo” Davis said he’s excited about making it back to the championship game.

“We’ve wanted this since last year,” Davis said. “It’s going to be a good game.”