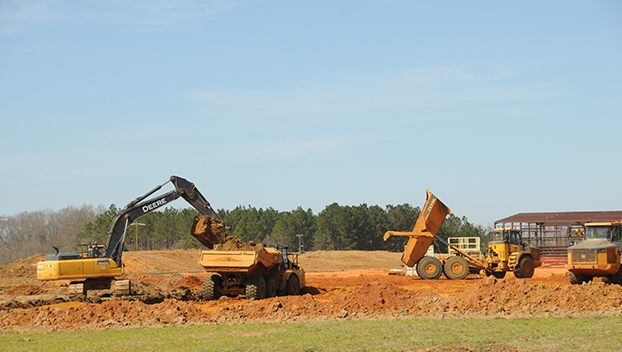 Shown is construction at the site where Coastal Growers LLC will have its peanut shelling facility across from Masland Carpets. | Andrew Garner/Atmore Advance

Gov. Kay Ivey will be present for the event Wednesday

The city of Atmore and Coastal Growers LLC will host groundbreaking ceremonies for Coastal Growers’ new peanut shelling facility Wed., March 10, and will welcome Gov. Kay Ivey to Atmore as part of the festivities, according to a release.

“I’m thrilled to be a part of the groundbreaking for Coastal Growers which will be a first-class peanut production facility,” Ivey said. “Coastal Growers is proving that Alabama’s economy remains strong and is bouncing back from what has been a hard year. This partnership is a win-win for Atmore, the surrounding communities and the state of Alabama.”

Ceremonies will take place at the construction site, located in the Atmore Industrial Park across from Masland Carpets. The $87 million project will eventually employ 150 fulltime workers and serve as an epicenter for peanut processing in south Alabama. More than 100 farmers will have an ownership stake in the company, which was organized in early 2021 as a cooperative to give Alabama farmers an additional outlet for peanut shelling and increased profits from their crop.

The facility will cover more than 60 acres inside the park, and will be served by a future railroad spur. The project received support from the Alabama Department of Economic and Community Affairs, Ivey, the Alabama Department of Commerce, Delta Regional Authority, South Alabama Regional Planning Commission, Alabama Peanut Producers Association, Alabama Farmers Federation, the Port of Mobile and other statewide groups, as well as the City of Atmore, United Bank Community Development, USDA, U.S. EDA, Alabama Power Co., the Escambia County Industrial Development Authority and other local partners.

While employment at the facility will bring a boost to Atmore’s economy, the broader economic impact of the facility will result in increased profitability and economic opportunity for peanut farmers in both Escambia County and across the region, if not the entire southeast. Coastal Growers reports that farmers from Florida, Mississippi and Georgia, as well as Alabama farmers from outside the southern region of the state will send peanuts to the facility. Those farmers, who will control their own shelling via the Coastal Growers project, will realize an additional 10-20 percent profit on their crops each year.