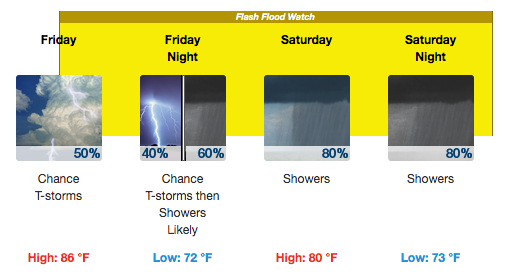 A flash flood watch has been issued for the Atmore area through Saturday night, according to the National Weather Service.

Beginning tomorrow, Fri., June 18, there is a 50 percent chance of thunderstorms. By tomorrow night, the percent chance increases to 60 percent. New rainfall amounts are between a tenth and a quarter of an inch, except higher amounts possible in thunderstorms, according to the NWS.

On Saturday, the percent chance is at 80 percent for showers throughout the day and night.

Escambia County EMA Director David Adams released the following statement this afternoon regarding the tropical disturbance located in the Bay of Campeche.

“The disturbance is expected to develop into a tropical depression by Friday and move to the northern Gulf Coast over the weekend,” Adams said. “The major impacts to Escambia County Ala. are expected to be heavy rainfall with possible flash flooding in some areas. Rainfall totals in the county are expected to be from 4-8 inches through the weekend. Some isolated tornadoes may be possible.” 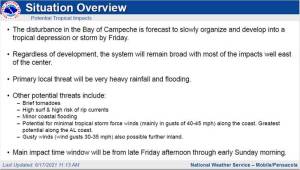 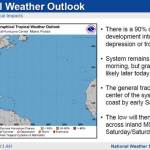 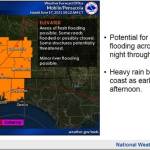 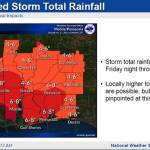 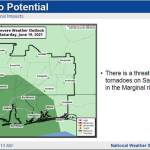