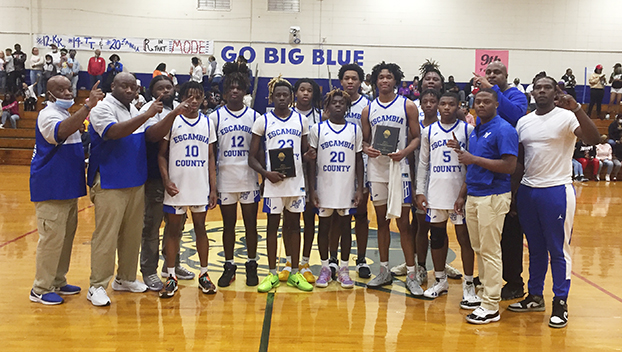 CORRECTION: In an earlier version of this story, the Class 4A sub regional game time was incorrect. We have placed the correct game time in the story.

Escambia County put together a dominant start and beat Williamson 97-63 tonight to claim the Class 4A, Area 1 championship in Cornell Torrence Gymnasium.

Approximately 17 minutes after the opening tip off, the Blue Devils were already ahead 28-14 going into the second period. A combination of good defense and a strong transition game made their presence known early and throughout the contest.

ECHS boys basketball coach Layton Knight, soon after a celebratory water bottle shower from his players, said a point was made from his team.

After some early buckets by the Williams brothers, Johnson got things going after a layup on a turnover to make it 6-2. McPherson found Stephen later to give ECHS a 9-2 lead in the first.

Later in the opening period, Johnson got a rebound and hit a pass to McPherson, who got an and-one play with 1:42 left.

Sheldon hit a jumper to start the second, and added a 3-pointer to give the Blue Devils a big lead at 36-14.

Arnold got a rebound and putback later in the second as ECHS led 45-25.

Things slowed down a bit for ECHS in the third, but the Blue Devils held a 23-point advantage going into the fourth.