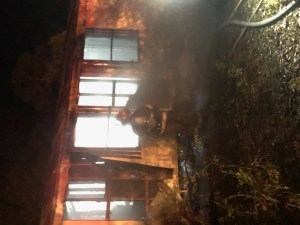 A fire destroyed a mobile home just north of Atmore, according to fire officials.

Barnett Crossroads Assistant Chief Ryan Reaves said in a release that firefighters from Littlerock, Barnett Crossroads and Pineview were dispatched to a structure fire in the 600 block of Hogwallow Road off of Butler Street at 11:17 p.m. on April 4.

“Firefighters arrived on scene to find a well-involved single wide mobile home and immediately began a defensive attack due to the age and condition of the home,” Reaves said. “The fire was brought under control by approximately 12:15 a.m. on April 5. Fire units remained on scene extinguishing hot spots and checking for further extension of the fire and cleared the scene around 1 a.m.”
Reaves said good mutual aid played a big part in the fire response.