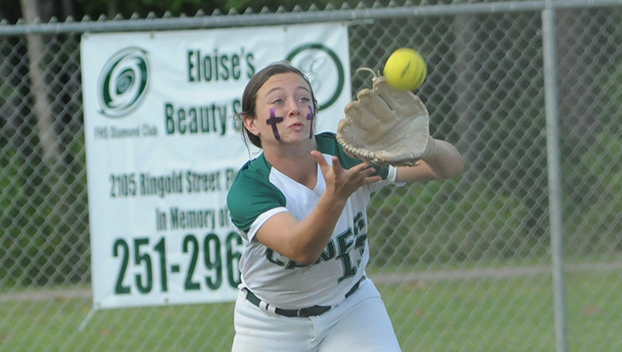 The Lady Canes battled their rival Tigers after the Brewton team forced the deciding game, winning 10-8 in the first championship game.

Both teams advance to the south regional tournament in Gulf Shores, where action begins on Tuesday.

The lead changed three times in the first three innings, and Flomaton tacked on six runs in the sixth to pull away for good.

Emma Grayce Fuqua earned the win on the mound for FHS, allowing two runs on three hits in 1.0 innings. McKenna Petties pitched 1.1 innings and allowed four runs on three hits; and Jalia Lassiter pitched 4.2 innings, striking out two and allowing one run on one hit.

Kylee Langham, Kristen Coleman, Pettis and Leah Rolin led FHS with two hits each. Coleman added three RBIs in the win. Lassiter had one hit and three RBIs; Briana Stuckey and Danielle Schreiner had one hit each.

Trailing 2-1 in the fifth inning, the Lady Tigers scored three runs each in the final three innings to pull away.

Flomaton didn’t back down, scoring three runs in the sixth and seventh each.

Fountain went 3-for-4 with two RBIs and two runs to lead TRM; Belle Walker went 2-for-2; Rebekah Rowell went 1-for-4 with four RBIs; Thomas went 1-for-5 with an RBI; and Byrd went 0-for-3 with an RBI.

Kaitlyn Barnett pitched 2.1 innings, striking out three and allowing six runs on four hits to earn the win for TRM.

Lassiter and Pettis had two hits each to lead FHS. Kristen Coleman went 1-for-3 with a home run and two RBIs.