An Atmore man was arrested on trafficking and drug charges on July 1, according to officials. 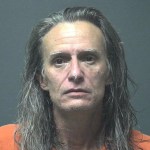 McMann said McGhee was transported to the Escambia County Detention Center in Brewton.